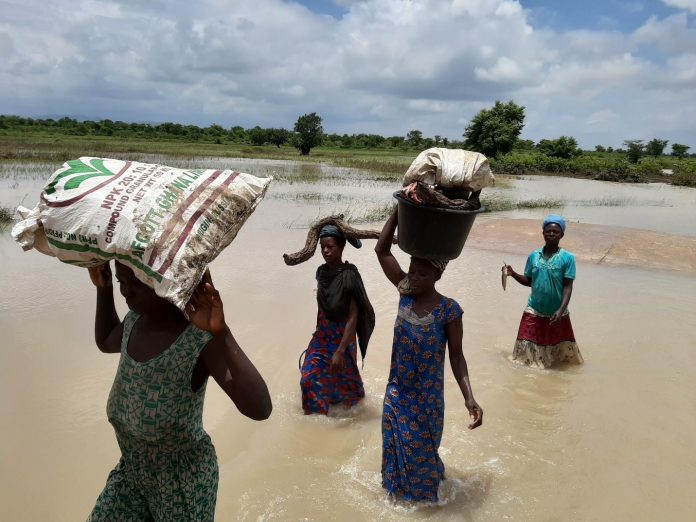 Twelve people have so far been confirmed dead as a result of floods caused by torrential rains and thunder strikes in the North East Region.

The hardest-hit area is the Mamprugu Moaduri District, popularly known as Overseas. About 17 communities have currently been cut off from the district and the Regional capital.

This came to light when a team led by the Deputy Director-General of NADMO In-Charge of Operations, Abu Ramadan, paid a working visit to the Zipline Vobsi Center in Walewale.

The team was made up of officials of NADMO and security personnel from the 48 engineer Regimen of the Ghana Armed Forces first point of call was at the Zipline Vobsi drone center in Walewale, capital of the West Mamprusi Municipality.

The move was to find out how prepared the drone center is to help transport medical consumables to flood-prone areas when the valves of the Bagre and Kompienga Dams are opened.

Currently, the water level in the Bagre Dam is 234.48 centimeters. Managers of the dam say, the valves will be opened when the height is 234.75 centimeters.

The years when all flood-prone communities in Northern Ghana were disturbingly rendered inaccessible as far as delivery of essential medical supplies is concerned during rainy seasons, is now a thing of the past as Zipline is using its Vobsi medical drone delivery Centre at Vobsi near Walewale in the North East Region, to deliver essential medical supplies to health facilities in some of the Northern belt areas of Ghana.

Speaking with GBC NEWS, a flight operator at Zipline Vobsi Center, Kenneth Kissi, said the center is well resourced to supply non-medical and medical consumables to all the communities that will be cut off as a result of the spillage of the Bagre and the Kompienga Dams.

The North East Regional Minister, Mr. Zakaria Yidana, spoke on the number of deaths recorded in the region as a result of floods and thunder strikes.

The District Chief Executive for the Mamprugu Moaduri District, Abu Mohammed, said about seventeen communities in the district have been cut off from the district and the regional capital adding that the situation is impacting negatively on economic activities in the area.

The Deputy Director-General of NADMO In-Charge of operations, Mr. Abu Ramadan, expressed satisfaction over the willingness and enthusiasm among staff of Zipline Vobsi Center and the members of the Disaster Management committee to help minimize the impact of the spillage of the Bagre and the Kompienga Dams.

Most of the farmlands in the flood-prone areas have been submerged.

Hollard Insurance is two-time commercial line insurer of the year