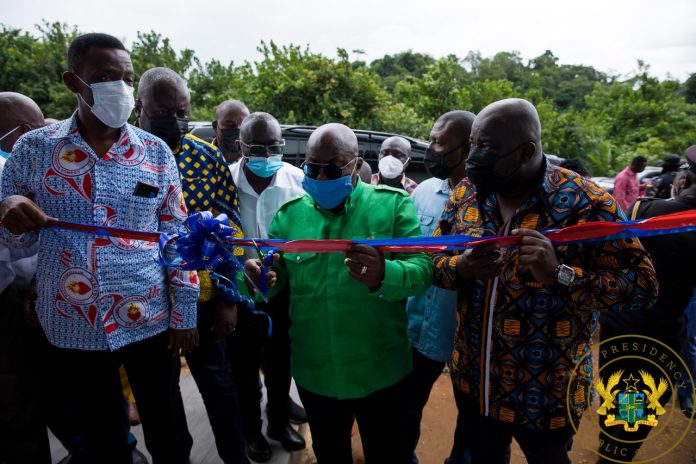 The President of the Republic, Nana Addo Dankwa Akufo-Addo, on Friday, 3rd September 2021, commissioned the Narubiz Rubber Factory, a company operating under Government’s 1-District-1-Factory initiative, at Wassa Dompim, in the Wassa East District of the Western Region.

The factory, which is a 100% Ghanaian owned company, has the capacity to process twenty (20) tons of rubber per day for export to countries such as Turkey, Malaysia, and Hong Kong. It is expected that a total of 6,240 tons of processed rubber per year will be exported, which will generate some US$9.6 Million of foreign exchange into the country.

Commissioning the factory, at the commencement of his 2-day tour of the Western Region, President Akufo-Addo that the total investment for the factory is US$2.1 million, with GCB Bank providing a US$1.38 million loan facility to the company, under the 1D1F Initiative being implemented by the Ministry of Trade and Industry.

In addition, the factory has enjoyed import duty exemptions on plant, equipment, and machinery from Government which among other incentives, have been designed to boost the competitiveness of the companies operating under the 1D1F programme.

The factory, whose construction began on 10th February 2020, currently offers direct and indirect employment to over 1,340 employees including out-growers, latex harvesters, farm maintenance workers and transporters.

The President noted that the siting of the factory in the Western Region will encourage more Ghanaians to engage in the cultivation of natural rubber in the catchment area, as well as other neighbouring regions to feed the state-of-the-art factory.

With Ghana’s emerging automobile industry, he was confident that factory will play a critical role in the development of component parts for the auto industry, such as vehicle tyres, car seats and fan belts, which could be produced from the raw materials currently being manufactured from Narubiz Rubber Factory. 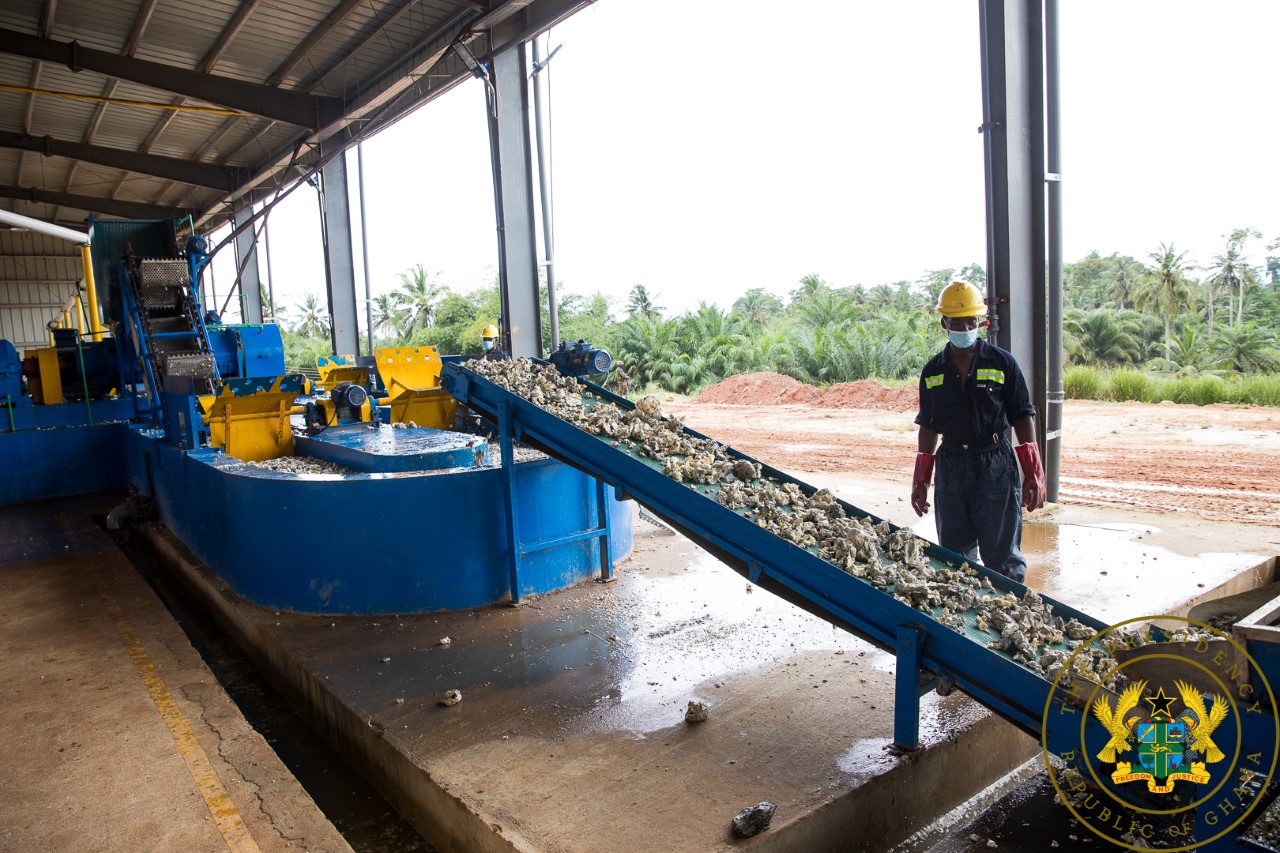 President Akufo-Addo commended the Business Promoters and Traditional Authorities of the area for their unflinching support for the project, as well as GCB Bank for providing the loan facility for the establishment of the factory.

In Shama, the President commissioned Phase 3 of the KEDA Ceramics factory, whose construction started in September 2019, and was completed in June 2021.

The factory has generated some 2,000 direct and 5,000 indirect employment opportunities, with the company having invested some $150 million in all three phases, resulting in an increased production capacity of 150,000 square metres of tiles per day. Currently, the company exports 60% of tiles produced to the West African market.

It will be recalled that the President on Tuesday, 23rd July, 2019, cut the sod for the thirs phase of expansion works of the factory, a company operating under Government’s “One District, One Factory” initiative.

President Akufo-Addo stated, at the time, that “the operations of the company have also seen a significant reduction in the import of tiles by as much as 14%. The contribution that this company is making in the industrialization agenda of the country and the transformation of our economy is significant.” 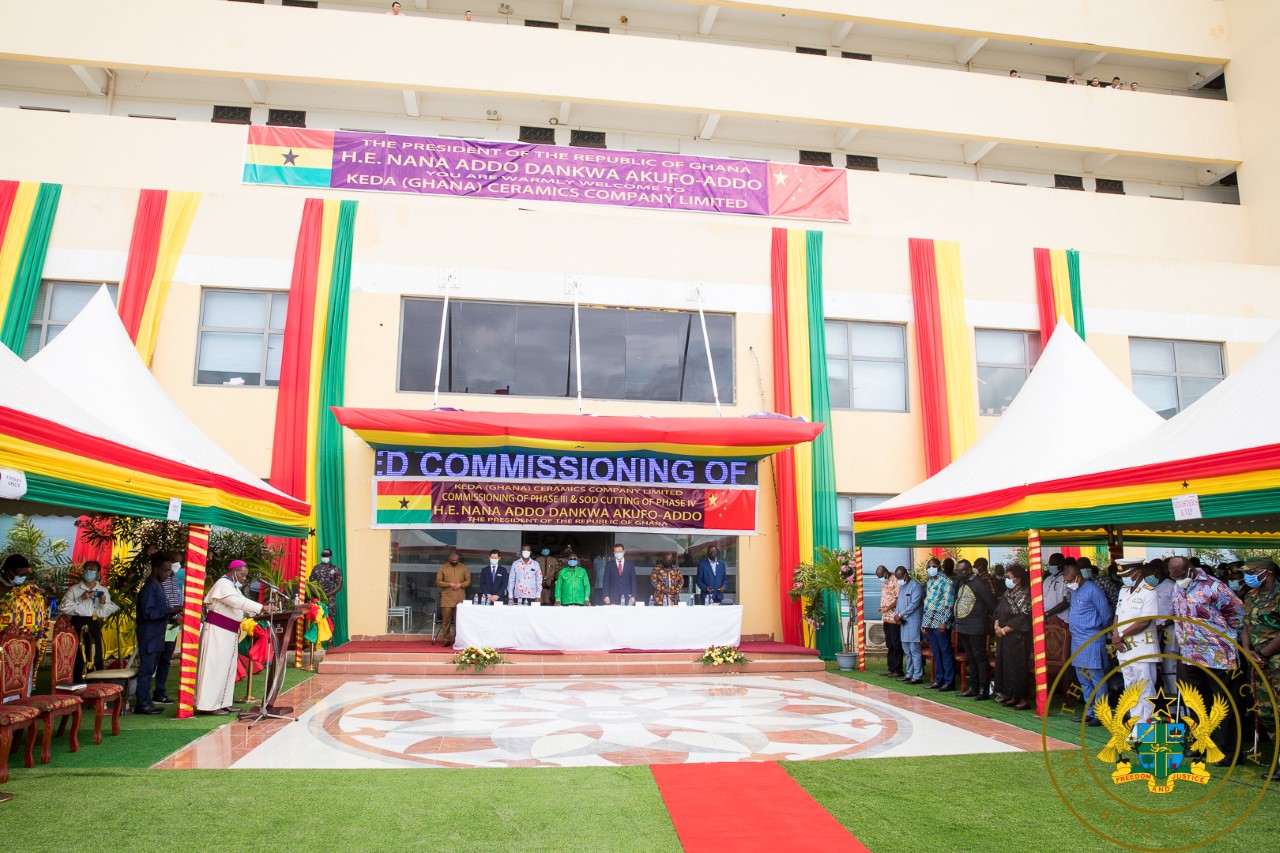 Particularly happy about the decision of the company to source their raw materials locally, the President noted that “many of those things we can do here in Ghana, we intend to begin the process of doing them here in Ghana. That is the way we can develop our economy and begin to address the living standards of our people.”

Persons without face masks, others made to clean site for Ablekuma District Hospital