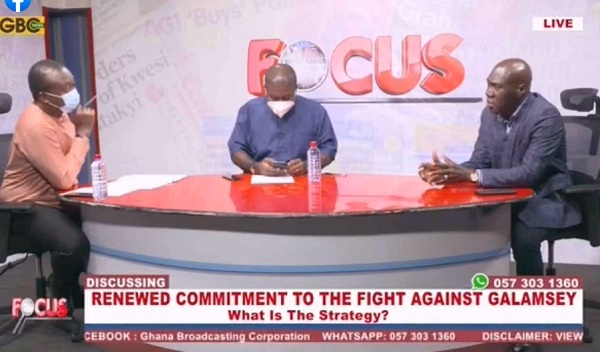 Panelists on GBC’s Current Affairs programme ‘FOCUS’ have resolved that the fight against galamsey needs a strong political will and leadership commitment especially from the President regarding punitive measures for those involved in the act.

In his submission, former Director of Communications of NPP, Nana Akomea called for punitive measures against actors who renege on their responsibilities and look on for illegal mining to fester.

He said the fight against galamsey has not been successful due to multi-faceted factors including ineffective enforcement. Mr. Akomea made a number of recommendations in curbing the menace, saying there would be massive gains in the fight if for instance, duty bearers like MMDCEs who head the Security Councils of the Assemblies are held liable for the prevalence of illegal mining in their localities.

He again called for a ban on the use of earth moving machinery for surface mining in view of its destructive impact on the environment.

Meanwhile, Former Minister of Lands and Natural Resources and former MP for Tamale Central, Inusah Fuseini called for a review of efforts in the fight against the menace.

He said the problem requires a multi-sectorial approach involving the National Security and MMDAs among other relevant stakeholders to eliminate the canker.