The Ghana Education Service (GES) has directed the authorities of Wesley Girls’ High School in the Central Region and other Senior High Schools nationwide to allow Muslim students to partake in the Ramadan fast.

“The Ghana Education Service, therefore, directs Wesley Girls’ High School as well as any other school to allow any such student who wishes to fast for any religious reason to do so.”

The directive was issued on Saturday, May 1, 2021, in a press statement signed by the head of the Public Relations Unit of GES, Madam Cassandra Twum Ampofo.

Wesley Girls’ High School had prevented a Muslim student from fasting during the ongoing Ramadan period. The school has been lambasted by a number of Muslims and human rights advocates in the country.

GES explained that the school took the decision based on health grounds.

“The net effect [of fasting] was that students developed various health conditions. The school, therefore, took the decision, then, that irrespective of one’s religious background, fasting was not permitted. It was therefore imperative that to ensure that the health of students was not compromised vis-à-vis their organised school schedules, this long-standing practice had to be maintained. This was the basis for the refusal by the school authorities of the girl’s request to fast during Ramadan,” GES explained in the statement.

The statement further noted that the Minister of Education, Dr. Yaw Osei Adutwum, after meeting with the board of Wesley Girls advised GES to put measures in place to address the concern of such students.

“The Minister advised the Ghana Education Service to put in place measures to address the matter bearing in mind the rights of students and the concerns of schools on the health risk associated with the fasting.”

GES thus directed schools to allow such students to fast but also urged parents of such students “to write to the school indicating that the school shall not be held liable for any health condition of the student as a result of the fast”.

Below is the full statement from GES 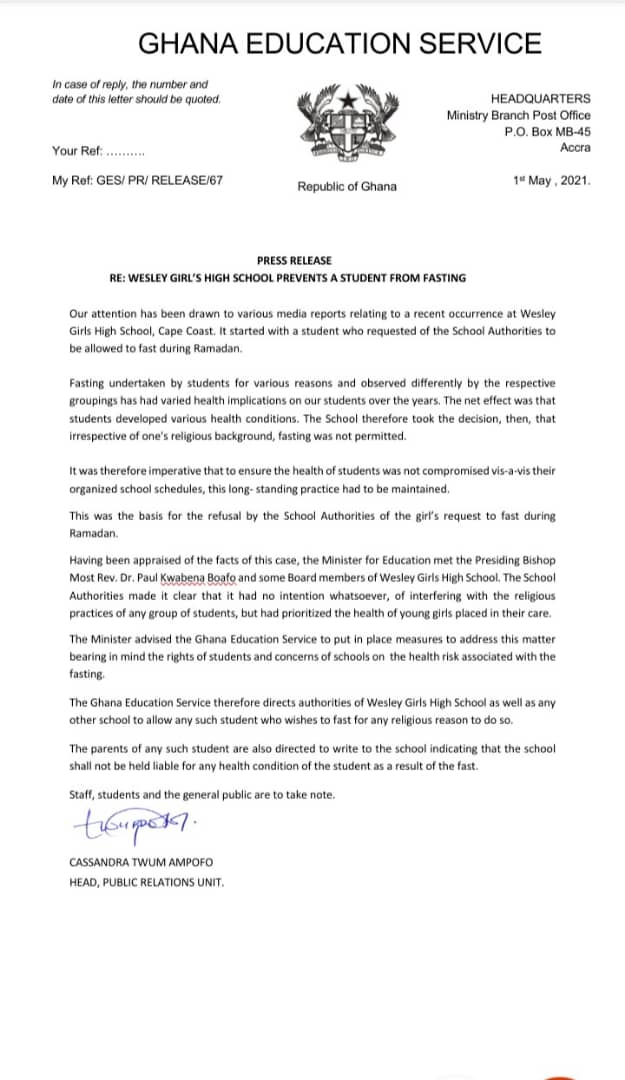 Reported cases of missing persons on the rise [Video]

Reported cases of missing persons on the rise [Video]