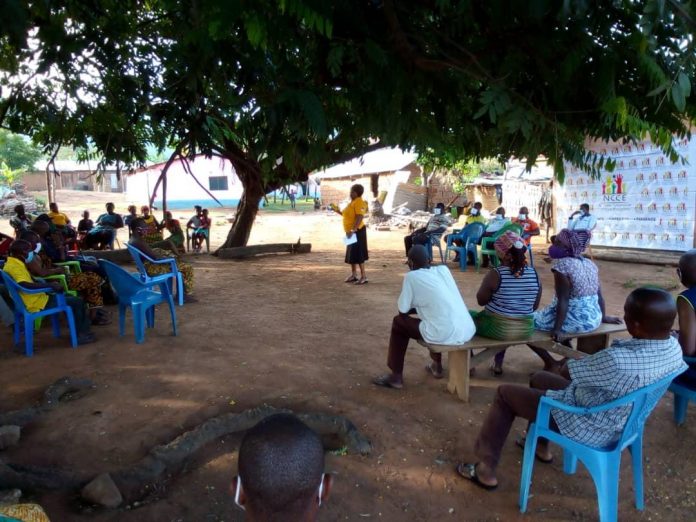 The Assistant Civic Education Officer (ACEO), Madam Irene Mawusi Klu, has encouraged the citizenry to possess the constitution and its principles as the guarantee of freedom and nationality.

She said while cementing the individual’s rights, the constitution also provided the guides to responsible citizenry and thus adherence to its standards formed the hallmark of good citizens.

Madam Klu made the call when she addressed the people of Agormor in the Akatsi North District of the Volta Region as part of activities to mark the 2021 Constitution Week Celebration.

She said the 1992 Constitution guaranteed the rights and freedoms of citizens; right to education, expression of taught, gathering, life, to own property, marry and not to marry, worship, fair trial, to join any political party of one’s choice, right of the sick, right of women, economic rights and right of the persons with disability.

Madam Klu also reminded them of their responsibilities to the State as per the Constitution and urged them to honour their tax obligations to the state.

The community was urged to keep the environment clean, safeguard public property, participate in public elections, respect the rights and freedoms of other citizens, and to defend country and the Constitution at all times.

She said adherence to the COVID-19 protocols including vaccinations were also the responsibility of citizens towards curbing the infection rate of the disease.

The Civic Education Officer appealed again to parents to live up to their parental responsibilities and provide for the basic needs of their children to help ameliorate the rate of teenage pregnancy in the district.

She said the District had been plagued with teenage pregnancy, which was a result of incessant early sex among teenagers across the district.

Madam Klu said this development had placed the District in an unpopular position in the league of teen pregnancies in the Region.

Mr. Seth Kofi Deenu, District Director of the NCCE, addressing congregants of St. Anthony Catholic Church and Pentecostal Holiness Church all of Ave Afiadenyigba as part of the celebration, appealed to the Church to respect the laws of the land.

He further stated that providing accurate information to enumerators in the upcoming census is a demonstration of respect for the Rule of Law and would make it possible to collect trusted data that would help in planning.

Mr. Deenu appealed to citizens to eschew violent attacks against enumerators and asked everyone to be nationalistic enough to help ensure success of the census exercise.

He pleaded with would-be enumerators to endeavour to collect accurate, quality and policy-relevant data devoid of malice and ill motives, saying they must “not engage in any armchair approach, but to collect data and to do a diligent job”.