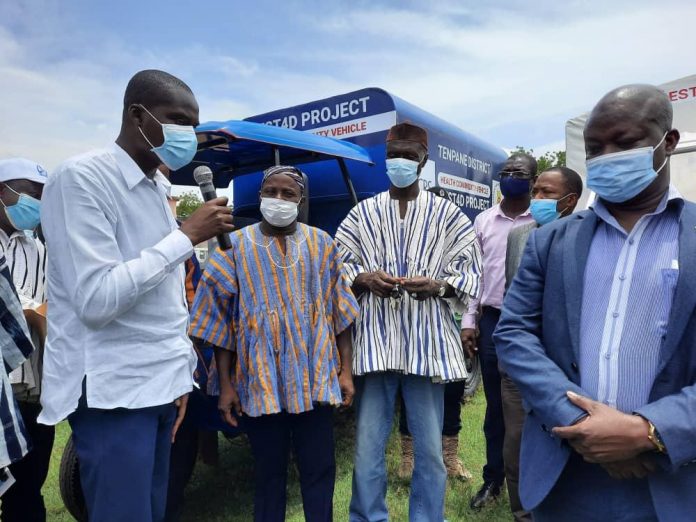 Ten districts in four regions in the northern part of the country have taken delivery of 40 modified motor-tricycle ambulances and 10 health commodity delivery vans to help strengthen emergency response in rural areas.

The vehicles will support in improving the quality of health service delivery across the beneficiary districts as well as serve as a bridge between high-quality health care and rural communities living at the last mile.

The beneficiary districts include; Central and West Gonja in the Savannah Region, Nanumba North, Saboba and Zabzugu in the Northern Region, Bunkpurugu-Nakpanduri, Yunyoo-Nasuan and Chereponi in the North East Region and Garu and Tempane in the Upper East Region.

The vehicles were presented to the districts by Catholic Relief Services (CRS), an international non-governmental organisation, as part of its Rural Emergency Health Services and Transport for Systems Development (REST4D) project, which is being implemented in the beneficiary districts with funding from the Helmsley Charitable Trust.

Vice President Dr Mahamudu Bawumia, whose speech was read by Alhaji Shani Alhassan Saibu, Northern Regional Minister during the presentation of the vehicles to the districts through the National Ambulance Service in Tamale, said the initiative was in line with government’s efforts at providing quality health care services to the people.

Dr Bawumia said “We are all aware of the enormous cost of ambulances and health commodity vans. By investing in a model solution for emergency health care provision, in consultation with the communities themselves, we are moving closer to a sustainable response that is in line with the government’s investment in critical health care delivery.”

He commended CRS for complementing government’s efforts, saying “I am delighted that CRS is providing rural ambulances to support the National Ambulance Service. The creation of emergency dispatch centres will ensure an integrated management approach to emergencies in the country.”

Mr Daniel Mumuni, Country Representative of CRS said each of the 10 beneficiary districts would receive four ambulances and a health commodity delivery van. “CRS has gone ahead to provide insurance for the vehicles and will support the delivery to all district capitals.” He added.

Mr Mumuni said “Beyond this, we are collaborating with the National Ambulance Service to train all drivers, committees to oversee the operations and maintenance of these vehicles.”

He announced that “CRS will equally partner all the 10 District Health Directorates to properly renovate and refurbish your district medical stores into appropriate modern cross docking stations for temporary safe storage of medical supplies before being delivered to the points of use.”

Mr Kwaku Agyemang Manu, Minister for Health, whose speech was also read on his behalf, called on the beneficiary districts to put in place measures to manage the vehicles to prolong their lifespan.

Professor Nuhu Zakaria, Chief Executive Officer of the National Ambulance Service applauded CRS for helping to improve the country’s emergency response system in rural areas, which he indicated would contribute to reducing maternal and child mortality in the country.