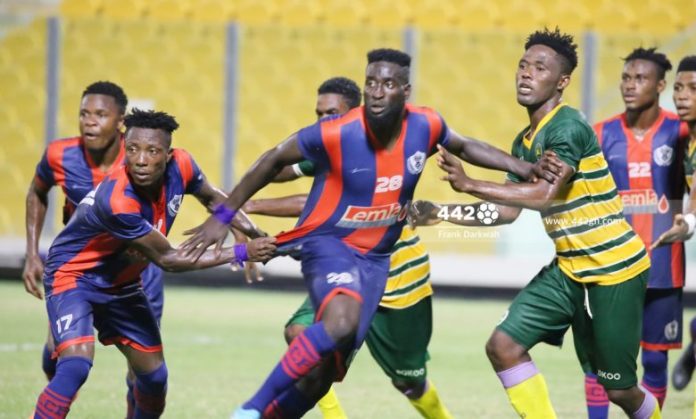 Legon Cities have been declared winners in their Ghana Premier League matchday 23 game against Ebusua Dwarfs at the Cape Coast Sports Stadium which was abandoned after the first half.

Referee Alpha Adey paused the match between Ebusua Dwarfs and Legon Cities at the Cape Coast stadium due to threats, attacks, and incessant within the dressing room areas by home fans

The referee felt unsafe and decided not to continue the match.

The center referee, his assistants and the match commissioner refused to return to the field for the second half.

The Ghana Football Association Disciplinary Committee has awarded three points to Legon Cities in accordance with Articles 33 (2) and 34 (12).

Ebusua Dwarfs have been held responsible for causing the game to end abruptly.

Thus Legon Cities will now move to the 13th position on the league log with 29 points whilst Dwarfs drop to the bottom zone.

Below is the decision from the DC.

That having been found to have forfeited the match, Ebusua Dwarfs FC shall be considered as having lost the match in accordance with Articles 33(2) and 34(12) of the GFA Premier League Regulations and accordingly, three points and three (3) goals are hereby awarded in favor of Legon Cities FC.

That in addition, being the defaulting club, Ebusua Dwarfs FC shall lose three (3) points from the club’s accumulated points from their previous matches pursuant to Article 33(5)(a) of the GFA Premier League Regulations.

That in addition, being the defaulting club, Ebusua Dwarfs FC is hereby fined Five Thousand Ghana Cedis (GH¢5000.00) payable to the GFA, 50% of which shall be paid to Legon Cities FC pursuant to Article 33(5)(b) of the GFA Premier League Regulations.

That in addition, being the defaulting club and being the Home Team, Ebusua Dwarfs FC is hereby ordered to pay an amount of One Thousand Ghana Cedis (GH¢1,000.00) payable to the GFA, which shall be paid to Legon Cities FC as their Transportation Cost as the Away Team pursuant to Article 33(5)(c) of the GFA Premier League Regulations.