The Minister for Roads and Highways, Kwasi Amoako-Atta, says he is optimistic that a new concept for road rehabilitation and maintenance in Ghana known as Output and Performance Based Road Contract (OPBRC) will translate into a meaningful policy change that will positively influence the road sector.

Mr Amoako-Atta made the observation at a ground breaking ceremony for European Union-funded funded feeder roads in the Upper West Region at Kpongu in the Wa Municipality.

The intervention involves a €35 million grant from the European Union for the rehabilitation, upgrading and maintenance of 670 kilometres of feeder and farm access roads in eight beneficiary districts and municipalities in Upper West.

GBC’s Emmanuel Mensah-Abludo in this report says the roads have been packaged into three lots.

The “Lot One” which is 235 kilometres will be done in the Wa Municipality, Wa West and Nadowli-Kaleo Districts. Jirapa, Lawra and Daffiama-Bussie-Issa Districts are also playing host to the “Second Lot” covering 210 kilometres.

The beneficiaries of the “Lot Three” which is 225 kilometres are Nandom Municipality and Lambussie District.

Mr Kwasi Amoako-Atta tasked consultants and contractors as well as all those who have roles to play in relation to the project to ensure that the country gets value for money.

Mr Amoako-Atta announced that his Ministry switched onto the Output and Performance Based Road Contract (OPBRC), as a result of the advantage it has over the traditional road construction and maintenance contract.

He observed: “In traditional normal road construction and maintenance contracts, the contractor is not responsible for the design but only execution of the works within the contract period and one year defects liability or defects notification of maintenance period. I am happy that under the OPBRC however, the contactor designs and constructs the roads as well maintains the roads over a minimum period of five years.” 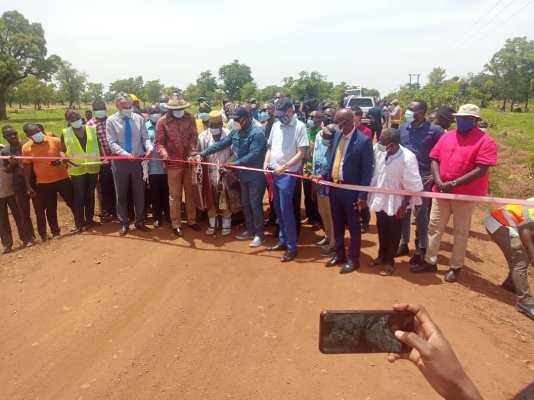 The Director of Policy Planning Monitoring and Evaluation Directorate of the Ministry for Food and Agriculture, Richard Twumasi-Ankrah thanked the European Union and the World for providing the needed financial support for the European Union-Ghana Agricutural Programme (EU-GAP), and particularly for the project [Productive Investment for Sustainable Agricultural Development in Northern Savannah Ecological Zone of Ghana].

Mr Twumasi-Ankrah who stood in for the Minister for Agriculture, Dr Owusu Afriyie Akoto, said the support is in line with government’s efforts to bridge the development gap between the North and the South.

The EU Deputy Head of Mission and Head of Political Section, Pieter Smidt Van Gelder, indicated that lack of infrastructure is a major bottleneck to the development of agricultural production and processing in the Upper West Region and that the European Union is proud to be part of the intervention to surmount the challenge.

Mr Van Gelder who deputised for the EU Ambassador to Ghana, Mrs Diana Acconcia, pointed out that the support of €35 million for the roads rehabilitation is one of the larger €145 million, European Union-Ghana Agricultural Programme (EU-GAP).

The Program Leader for Infrastructure at the World, Bank, David Vilar, represented the Country Director of the World Bank, Pierre Laporte. Mr Vilar said in spite of recent progress in reducing poverty in Ghana, spatial inequalities still persist and that physical connectivity is essential to tackle the inequalities and added that the intervention is in sync with Ghana government’s policy.

“This intervention will align with the government of Ghana’s revised national transport policy which was recently approved by cabinet in August last year [2020]. In particular, the policy goal is to create accessible, reliable, safe and secured transport system for road users,” Mr. Vilar averred.

The Upper West Regional Minister, Dr Hafiz Bin Salih, appealed to the project communities to cooperate with the contractors executing the projects for them to deliver on schedule.