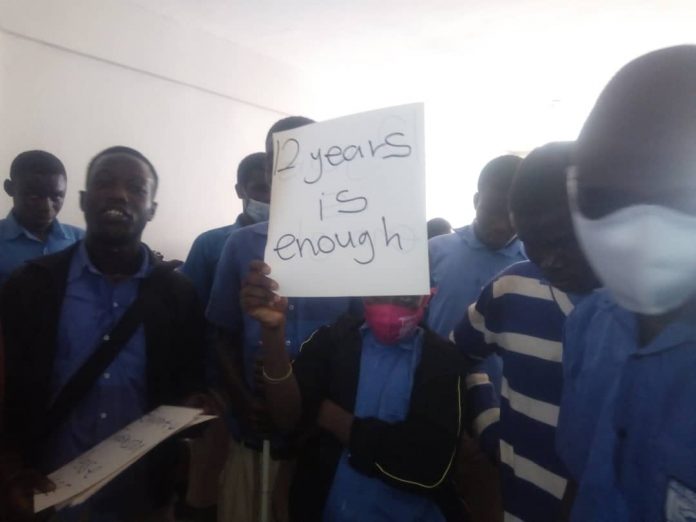 The Students’ Representative Council, SRC of the Akropong School for the Blind is demanding the removal of the headmistress.

The SRC made its request in a petition presented to the National Chief Imam, Sheikh Osman Nuhu Sharubutu, for onward submission to the government.

Last week, the SRC and some old students staged a demonstration after presenting a similar petition to the Ghana Education Service for the immediate removal and interdiction of the Headmistress, Madam Mahela Narh.

The SRC accused the Headmistress of alleged mismanagement and misappropriation of funds and cash donations.

During the Chief Imam’s recent visit to the school, together with the Okuapehene, Oseadeeyo Kwasi Akuffo to present some food items to the school, the students and their leaders wielded placards with inscriptions such as ‘We want change and ‘the Headmistress must go’, among others.

They blocked the school’s main entrance which stalled the movement of the National Chief Imam, the Okuapehene, the Eastern Regional Minister and their entourage for a while.

The Assistant School Prefect, Godknows Akpo, told journalists after presenting their petition, that the Headmistress has been with them for the past 12 years, but the school has not seen any upward changes.

The students alleged that when items are donated, they are not shared amongst them, adding that they are made to consume porridge without bread, hence the demonstration.

Director of Operations at the Ghana Hajj Board, Ismaila Ibrahim, who received the petition on behalf of the Chief Imam promised that the concerns of the students will be looked into.