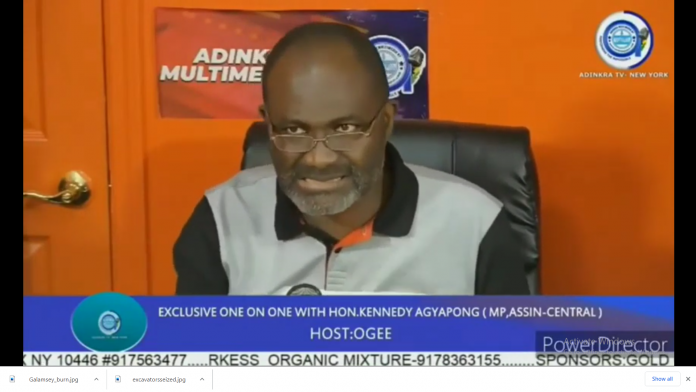 The vociferous Member of Parliament for Assin Central, Mr Kennedy Agyapong has named someone he alleges was involved in the death of the journalist, Ahmed Hussein Suale.

In a video interview seen by Graphic Online on Monday night [May 24, 2021], Mr Agyapong said the suspect [name withheld] was a resident in the Ashanti Region.

He asked the security agencies to go pick him up as part of their investigations into the case.

Mr Agyapong himself has been named as a suspect in the case.

This followed a threat he issued on television and on radio against journalist Anas Aremeyaw Anas, with whom the late Ahmed Suale worked with.

Ahmed was shot three times, twice in the chest and another in the neck at night at Madina in Accra while driving home by unidentified men who were riding a motorbike. It has been more than two years since Suale’s life was callously snuffed out by the suspected assassins.

The police have since been on the tails of his killers much to no avail yet.

Mr. Agyapong’s name has come up as part of investigations and while the nation awaits closure on the gruesome murder, Mr Agyapong in the video interview on Monday night dropped the name of the new suspect, which he alleged the police has been trailing for more than one year.

He said: “Ahmed Suale, when I condemned Anas for a deal they were engaged in, the person who killed him is in the Ashanti Region.”

He alleged that he was briefed by police officers who told him [Agyapong] that they did not know how his name [Agyapong] came up and appealed to him to exercise and restraint and stay away from commenting on the case.

But Mr. Agyapong said he cannot stay away any longer as the police delayed in their investigations and since he needed to clear his name.

He alleged that the mentioning of his name as a suspect went to the extent where a Congressman in the US reported him, and that when he arrived in Houston [USA] in November 2019, he was stopped at the airport and told he was a suspect in a murder case in Ghana.

He said the police have the report on the said suspect in the Ashanti Region and he mentioned the name [withheld] in the interview.

He said the police have shown him pictures of the said suspect and over a year they have still not arrested him, “and my name is still out there [as a suspect].”

“And the sad story they told me whilst showing me a photo of the tall “guy” with his back showing was was that, anytime they picked information on his location and they informed the police in Kumasi,” by the time they [police in Accra] reached the destination, the guy had been alerted and he had fled.

He accused the police in Kumasi of being complicit in the investigation.

He said he was on a British Airways flight with the police officer who informed him about the suspect and that a new commander who has taken over has also confirmed the same suspect to him [Agyapong].

He said he was asked not to put out the name of the suspect and the police appealed to him to exercise restraint since they have completed the forensic report and are working on it.

Mr Agyapong insisted that it has been over four months since then and he cannot wait any longer but to drop the name of the new suspect publicly so as to save him from the “embarrassment,  accusation everywhere when they (police) know the killer.”