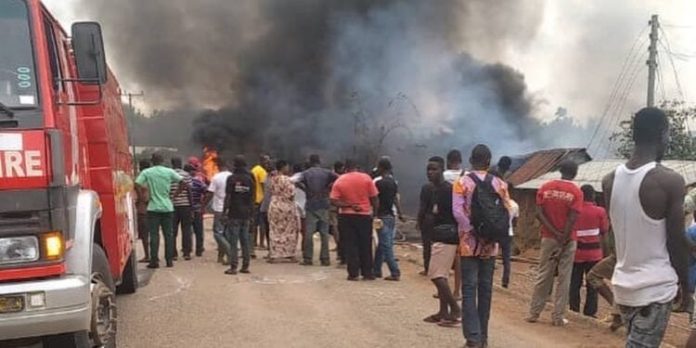 Mankranso District Police Command has commenced investigations into last Monday’s (May 24) fatal accident at Onyinanumfo in the Ahafo-Ano South-West District of the Ashanti Region.

Three people, including a two-year-old boy, perished in the accident, while five others, who sustained injuries, were sent to the hospital for treatment.

The accident occurred when a speeding fuel tanker, reportedly carrying diesel from Kumasi, caught fire after hitting a parked commercial bus on reaching a sharp curve at Onyinanumfo.

The Mankranso District Police Commander, Superintendent Richard Boahen in an interview at Mankranso, said the hospitalisation of the injured persons’ initially affected investigations.

He cited the difficulty in identifying the charred bodies of the driver and his mate, who were in charge of the burnt fuel tanker.

“For now, we are ready to commence full-scale investigations after gathering all the necessary facts needed for our work,” Police Superintendent Boahen confirmed.

He said information reaching his outfit indicated that the commercial bus driver was discharged from the hospital on Tuesday, May 25 and that the police had formally invited him to take his statement.

Preliminary investigations, according to the District Commander, had established that wrongful parking by the bus at the said community was one of the factors that led to the disaster.

“Even though the fuel tanker could also not escape blame for speeding, we think the situation could have been different if the commercial bus had parked at the right place instead of doing so on a sharp curve,” Police Superintendent said.

Meanwhile, the National Disaster Management Organization (NADMO) is mobilizing resources to resettle some 104 displaced persons at Onyinanumfo, whose houses got burnt when the fuel tanker caught fire.

The affected residents, currently putting up in makeshift abodes in the community, had so far been provided with roofing sheets, mattresses, second-hand clothes and clothing, mosquito nets and insecticide, as well as bags of rice and cooking oil.