Achimota School has backed down on a decision to freeze the court order to admit the two Rastafarian boys.

The school’s board in a statement on Wednesday, June 2, 2021, said it is however committed to an appeal against the ruling of the High Court.

It said the decision comes after consultations with two stakeholders on the way forward.

“Further to our statement issued on 1st June 2021 on the subject of two Rastafarian applicants, we have been in consultation with other relevant stakeholders to seek the best ways forward, taking into account the interests of all parties,” it said.

Adding that, “while the Board remains committed to the appeal against the High Court ruling, it will withdraw the application for a stay of execution pending the determination of the appeal by a higher court.” 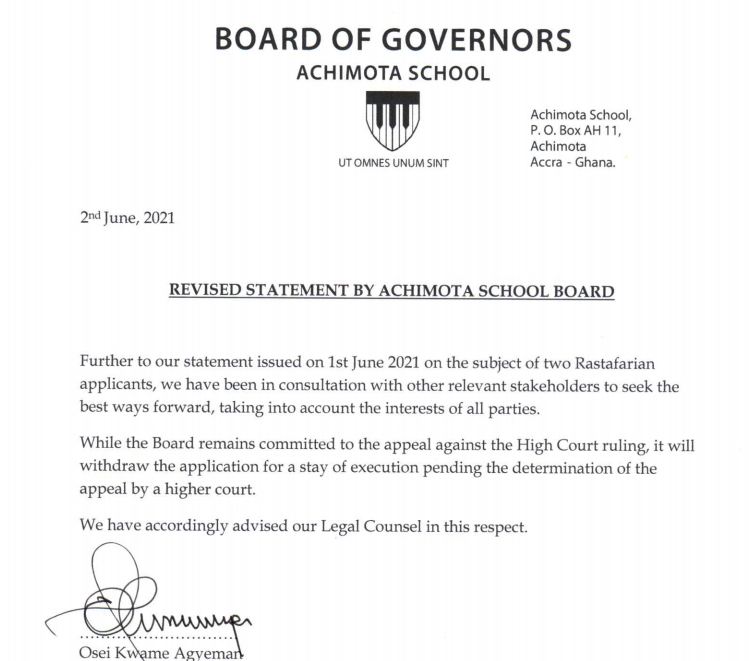 An Accra High Court on Monday, May 31, 2021 delivered its ruling regarding the denial of two Rastafarian boys; Tyrone Marhguy and Oheneba Nkrabea admission to Achimota School because they failed to cut their dreadlocks.

Justice Gifty Adjei Addo, the Presiding Judge, disagreed with the submissions of the Attorney General and granted all the reliefs separately sought by the embattled students except the relief of compensation in the case of Tyrone Marhguy.

According to Justice Addo, it is preposterous for the Attorney General to have even suggested that the two were not students in the first place.

Following the court’s decision, Achimota School through its board announced that it will appeal the decision.

The school subsequently made efforts to secure a stay of execution order in order to freeze the implementation of the order but it has now announced that it has withdrawn that decision.

The Education Minister,  Dr. Yaw Osei Adutwum was earlier today outraged over what he termed as the ‘unilateral position’ by the Governing Board of Achimota School to appeal the High Court order.

The Minister said it is not in the place of the board to take such a decision.

“I am very surprised, the Board cannot take that unilateral position to go back to court”, Dr. Adutwum said on Metro TV’s Good Evening Ghana.