The National Media Commission, NMC, has concluded that the treatment meted out to Citi FM’s Caleb Kudah and the invasion of the media house by national security operatives in May 2021 was wrong.

The Commission, in its report, following a petition presented to it by the management of Citi FM and Citi TV over the matter, said all institutions of state must act within the law and use approaches that reflect democratic values.

“The National Media Commission has determined that the treatment meted out to Mr. Caleb Kudah by the Ministry of National Security operatives and the subsequent invasion of the premises of Citi FM & Citi TV on Tuesday, May 11, 2021, was wrongful. The Commission took the view that all institutions in a democratic state must act within the law and adopt approaches that reflect democratic values,” the NMC stated.

The Commission after its investigation and interaction with all persons involved in the matter, said there is the need for a review of laws relating to security and media in the country “especially those about prohibited areas within the context of the Constitution (1992),” adding that there must be regular orientation programmes for both the media and security for both parties to appreciate each other’s role.

Read the NMC’s statement below: 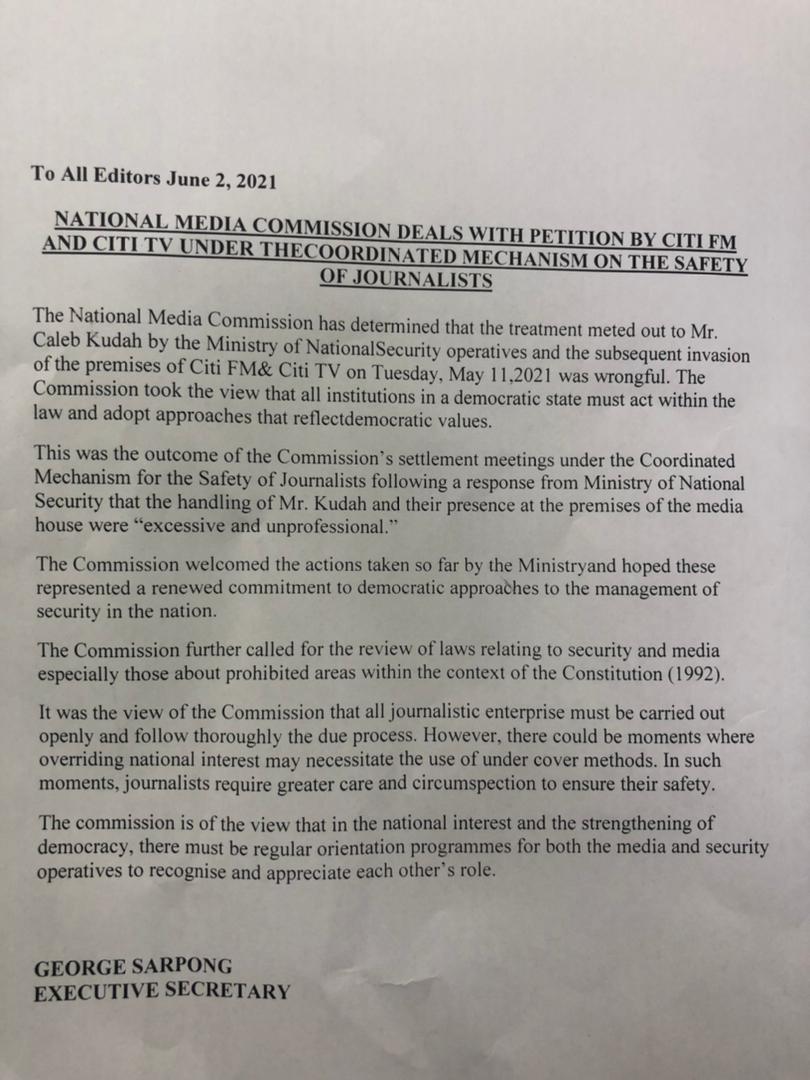 Meanwhile, Citi FM’s legal representative, Clement Akapame says the organisation is pleased with the content of the NMC’s report.

Mr. Caleb Kudah was arrested at the National Security Ministry on Tuesday for filming abandoned MASLOC vehicles parked at the premises of the Ministry.

He was at the Ministry to verify a claim by an official of MASLOC that all the cars had been given out.

This was after Caleb Kudah had complained about the wastage of public funds on social media.

This is because Caleb had forwarded some of the footage he captured to Zoe via WhatsApp.

Mr. Caleb Kudah in an interview with Bernard Avle on The Point Of View on Citi TV indicated that he was slapped several times by the security officers.

About 15 organizations including civil society groups and political parties, have condemned the incident and backed calls for investigations, whiles calling for reforms in the national security setup.

The National Security Ministry says it has initiated a probe into the case.