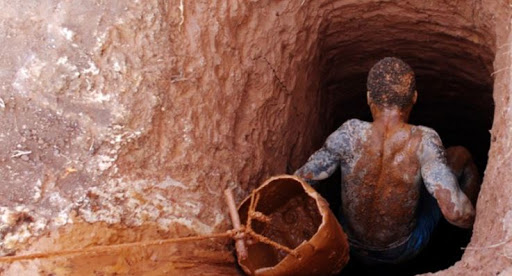 Some Small-Scale Miners at Gbane in the Talensi District of the Upper East Region are reported trapped in their mining pits by floodwaters.

Colleague miners at the site have positioned more than nine water pumping machines at vantage points to pump the floodwaters out of the more than 20 pits in the area to enable them to retrieve the bodies.

When the news team got to the mining site, it was observed that the rainwater which was flowing along a stream lost its path due to the heavy downpour into a nearby mining pit causing subsidence.

The pit is just a yard away from the stream.

The rainwater then filled the first pit and overflowed into the rest of the concatenate pits.

Miners who were inside the more than 20 pits consequently got drowned.

Speaking in an interview with GBC News some miners said the site has been visited by NADMO, Police and the Minerals Commission.

They said attempts to retrieve the bodies have not been successful.

Mr. Tampua Boazor debunked the allegation they are into illegal mining.

Meanwhile, a nearby Shaanxi Mining Ghana Limited is offering support in the form of water pullers and payloaders to help evacuate the miners.