The Leadership of the National Democratic Congress is set to mark the 42nd anniversary of the June 4th Uprising with a virtual lecture at the National Headquarters, Accra.

According to the programme, there will be a wreath-laying ceremony at Dr. Bannerman’s Park, Korle Gonno on Friday June 4th, 2021 at 7:30 am, and it will be followed by a virtual anniversary lecture on the theme: “The relevance of June 4 to contemporary Ghanaian” at party headquarters, 10am. 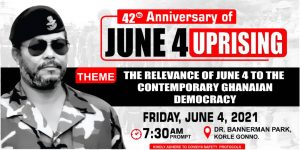 The speakers include: the General Secretary Johnson Asiedu-Nketiah, Dr. William Ahadzi, Rector of the Party School and the former Minister of Information, Fritz Baffuor,

The statement issued in Accra and signed by Kakra Essamuah, Director of Communications said, the programme has been drawn up to comply strictly with Covid-19 protocols.

The statement called on all party members, supporters and sympathizers to take note accordingly and participate in line with COVI-19 protocols.