The ongoing sea erosion in some parts of Ketu South has reached its crescendo and the effects on the people in the affected communities shall be grievous if not addressed or mitigated now. 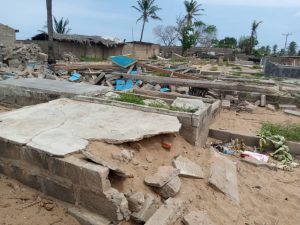 For the first time in many years the Atlantic Ocean has destroyed hundreds of homes along the coast of the communities like Agavdzi, Salakorpe, Amustinu, Adina and some parts of Agorko, all in Ketu South Municipality of The Volta Region. 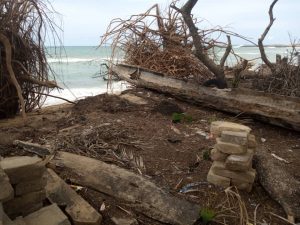 The intensity of the waves from the sea in these areas have been calamitous and a recipe for destruction, as the sea has taken over more lands and properties.

A trip by our correspondent to the area reveals very dilapidating scenarios: Homes, forests reserves, fishing boats and other valuable items have completely gone into the sea leaving debris of iron rods and cements bags and stumps with roots. 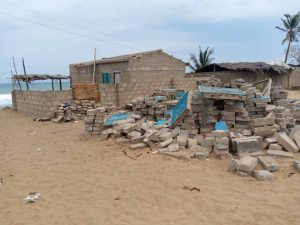 Our reporter in an interaction with a victim stretched his hand towards the sea and said, “We used to have homes at that place, but now the sea has taken over all our houses.”

According to him, a fishing community with people doing daily activities have now been taken over by the sea.

Below is a video with our reporter talking to a victim in his native Ewe Language.

The proximity of the sea to the Aflao-Keta highway is so alarming, because it is about 25 Metres away for it to cross the road into the lagoon which has its own repercussions on lives and properties for the Municipality. 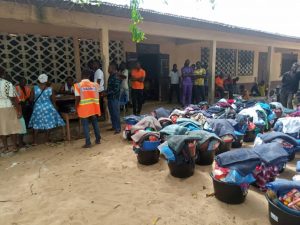 On Sunday, 7th June, 2021, NADMO officials were seen distributing some food items, student’s mattresses, blankets and co to hundreds of victims who have converged at Amutsi Basic School.