The Catholic Diocese of Damongo on Saturday climaxed its 25th-anniversary celebrations with a thanksgiving mass at the St. Anne’s Cathedral in Damongo.

The anniversary was under the theme “25 years of grace, transforming lives through evangelization; the way forward.”

Saturday’s thanksgiving mass brought together priests throughout the diocese and beyond as well as Catholics, traditional authorities, the Muslim community, other Christian denominations, politicians and other members of the general public.

Delivering the sermon, the Metropolitan Archbishop of Tamale and President of the Ghana Catholic Bishops Conference, Most Rev. Philip Nameh said the Damongo Diocese has a lot to be thankful to God for.

Most Rev. Philip Nameh who served as the first bishop of the diocese thanked the Gonja Traditional Council for the support it has given the church over the years and called on the council to continue to partner with the church for the total development of the area.

“I would like to thank Yagbonwura Safo Amantana Borenyinkye who was the Overlord when the diocese was created and the late Damongowura. They had a lot of understanding and gave the church a lot of land to be able to install those institutions and buildings which we use for educating God’s people.” 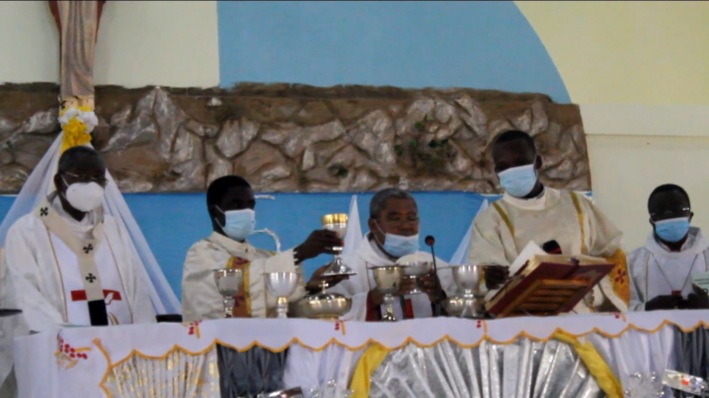 He also called on the Savannah Regional House of Chiefs to consider creating paramountcies for the minority ethnic groups in the region in order to foster unity and development.

According to him, all ethnic groups in the region have something to offer for the development of the region and giving them paramountcies will create an atmosphere of peace and inclusion for the region.

“I am asking the House of Chiefs of the Savannah Region to imitate the inclusiveness that Jesus has exposed to us as that which is granted by the father.”

“You have the Vaglikoora, you have the Safalba, I’m asking the house of chiefs to create paramountcies or raise those that have already got their governance systems to the level of paramountcies, create a paramountcy for the Fulani and the Brifors. If this had happened in the east, that ethnic conflict which involved so many people and destroyed so many houses will never have happened, so I am appealing to the house of chiefs to follow the way of inclusion.”

The bishop of Damongo, Most Rev. Peter Paul Yelezuome Angkyier at the end of the service also thanked members of the Gonja Traditional Council, the Savannah Regional Coordinating Council, the Muslim community and other stakeholders for collaborating with the diocese over the years.

He said the diocese is hoping for even better collaboration in the years ahead in order to move the area to better heights.

The Registrar of the Gonja Traditional Council, Abutu Kapori on behalf of the council and the Yagbonwura, thanked the Catholic Church for its contribution in resolving conflicts and developing the area.

“This church economically built the people of Savannah Region. As if that is not enough, I want to believe that most of the people here in one way or the other benefited from the Catholic Church. Indeed, the Overlord of the Kingdom will continue to appreciate you for the good work you have been doing.”