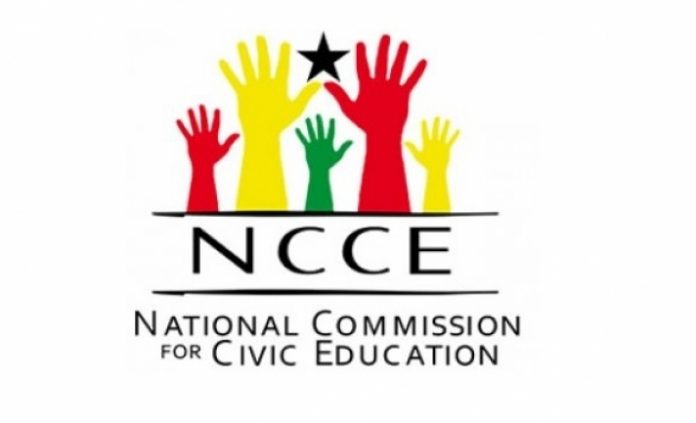 The Effutu Directorate of the National Commission for Civic Education (NCCE), as part of its activities to commemorate the 2021 constitutional week, has presented a number of booklets of the 1992 Constitution to some local F.M stations in the Municipality.

Presenting the copies to the respective stations, Mr Joseph Abban, Effutu NCCE Director, applauded them for giving the Commission air time as their contribution towards the promotion of civic education in the Municipality.

Mr. Abban announced that the celebration was to ensure that, the constitution became a living document, indelible on the minds and hearts of Ghanaians in pursuit of democracy and good governance.

This year’s celebration in the Municipality was sponsored by Governance Africa Foundation, an NGO, and it was under the theme:  “We are one, Ghana first”, is aimed at schooling the citizenry to focus on knowing their identity as Ghanaians.

The Director urged management and staff of the stations to continue to appreciate Civic Education and study the constitution well to be able to disseminate and educate people on their platforms.

Mr Abban said that when citizens are knowledgeable about their rights and responsibilities, they would be in the position to demand accountability from duty bearers.

He said April 28, was adopted as commencement date for the activities of the Commission to educate the citizenry because, that was the day a National Referendum was held to endorse the constitution in 1992.

According to Mr. Abban, NCCE had increase education to sustain the interest and participation of all in Ghana’s democratic dispensation in order to achieve good governance, social and political stability for national development.

He stressed the need for all to uphold the core values of democracy, know their civic rights and responsibilities, respect the rule of law, equal opportunity and prosperity and also contribute their quota towards the sustainability of unity and national stability.

The Managing Directors of the F.M stations in their appreciation and comments applauded the Commission for the work they were executing in the Municipality to promote civic education and expressed the need for them to deepen it.