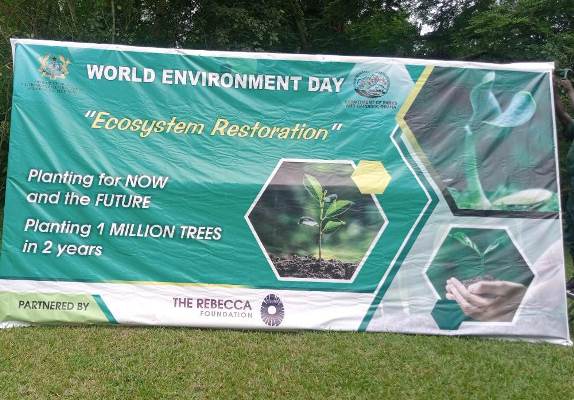 The Tarkwa Regional Office of Environmental Protection Agency (EPA) in collaboration with Obeng Mining Company Limited at Wassa Japa in the Wassa Amenfi East Municipality of the Western Region have planted 200 trees to create awareness on the need to reclaim the land.

The exercise which took place at the site of Obeng Mining Company Limited was part of activities to observe this year’s world environment day.

Wassa Amenfi East Municipal Assembly and other small-scale mining firms participated in the exercise. This year’s celebration was on the theme “Ecosystem Restoration”.

Mr Prosper Yaw Nkrumah, Acting Director of EPA Tarkwa, in an interview, He said “the impact of small scale and illegal mining had destructed the ecosystem. Both  the forest, cultivated lands such as food crops and cocoa farms, water bodies as well as wetlands hasve been destroyed due to the excessive use of excavators”

He stated that because EPA regulates the small-scale mining sector, they were required to provide technical assistance to those who have been permitted to go about their duties, and this included land reclamation.

“Since reclamation of the land is not forthcoming, we need to be proactive and encourage those who can make land available for reclamation to demonstrate to the nation that it can be done in the small scale mining industry,” Mr Nkrumah said.

Mr Nkrumah noted that his outfit would monitor the project to serve as a test case to differentiate small-scale mining from illegal mining.

The Mine Manager of Obeng Mining Company Limited, Mr Stephen Baidoo said the Mine agreed to host this Programme to have the opportunity to showcase their good works to Ghanaians.

He said, “we want to demonstrate to Ghanaians that every mining company operate under their prospective licences and on different land areas across the country”.

Mr Baidoo emphasised the need for government to conduct a forensic audit of every mining company to see which ones were following the rules and regulations of the work instead of stereotyping all miners as those destroying the water bodies.

Mr Safo Kwame Nyantakyi, Range Manager for Bogoso Huni-Valley ranges said they chose to plant acacia and Cedrela species because they do well in degraded mined out areas.

He beseeched management of the small-scale mining firm to keep the trees well as they would be visiting them intermittently to inspect the project.

Mr Alex Damptey, the Municipal Environmental Health Officer of Wassa Amenfi East, called on every Ghanaian to help restore the ecosystem by planting trees and keeping the environment clean as they all contributed to the current destruction of the forest and water bodies.