The Kuupole Foundation for Educational Support and Advocacy has expressed its desire to continue partnering with the Department of Agriculture for technical assistance and advice.

The move is to help upscale the Foundation’s sensitisation and education drive being carried out on its banana plantation at Ketuo in the Nandom Municipality.

A former Vice-Chancellor of the University of Cape Coast (UCC), Prof. Donwini Dabire Kuupole expressed the wish for further partnership when he visited the farm of the Foundation near the Black Volta which is being used to irrigate the plantation.

In this special report, GBC’s Emmanuel Mensah-Abludo says the cultivation of banana at Ketuo is an exciting initiative considering the weather pattern of the Upper West Region.

Out of the 10 acres under cultivation, seven are for banana whilst the rest are for cassava and maize. Forty-five (45) acres are also available for expansion.

Prof. Kuupole who is also the Founder and Chairman of the Foundation said though his primary motivation was to sensitize and steer young people into farming, he wanted to also prove a point that banana cultivation was possible in Upper West.

He stated: “I wanted to prove a point, some of the agric professors at the University of Cape Coast (UCC), I must be specific doubted that banana could thrive up here and I wanted to prove that yes we could do everything, we could plant every tree up here, provided the needed attention is given to it. So that’s what motivated me, that is how we started this farm[the Kuupole Farms].” 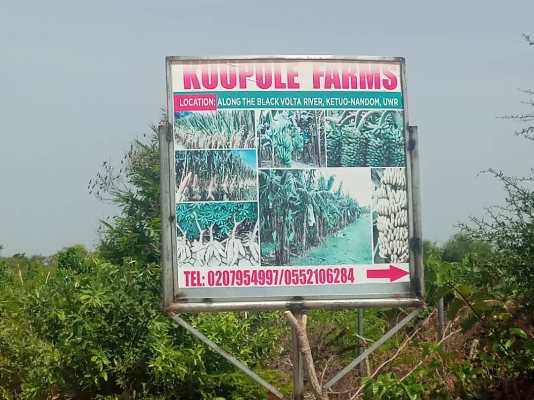 Prof. Kuupole made a strong case that agriculture is a game changer for young people.

“Farming can be very lucrative, depending on how you look at it and how you invest your energy, your time and some finances into it, it can be very lucrative for those who want to make money out of the farming. Those who want to do farming just for sensitization and education purposes like I am doing, I think is very helpful. So the youth, I must say should not hesitate into engaging in farming,” he averred.

There are a number of challenges confronting the Kuupole Foundation in implementing the farm project. They include, financial, destruction of crops by animals,marketing of the produce, poor road network, difficulty in improving the nutrient of the soil through irrigation and fertilizer application.

For instance, a drum of diesel is used every week for irrigation which has a huge financial implication for a non profit Foundation hosting a demonstration farm.

The foundation will be extremely excited if the documentation relating to the farm land is finalized as soon as practicable for it to have security of tenure and assurance to expand the plantation for the benefit of all stakeholders, especially, the youth.

Professor Kuupole emphasized that they are ready to partner development agents to lift the project to the next level, adding that, they are also prepared to take advantage of the Planting for Food and Jobs( PFJ) as well as other government initiatives. He said what the Foundation is yearning for is to have many more youth engaging in agriculture and advised education institutions in the catchment area of the farm to utilize it as a demonstration facility.

Prof Kuupole: “For schools around and those institutions that have agric departments, they should bring students to see what is happening here.”

The Financial Secretary of the Kuupole Foundation, Professor Mrs Alfredina Zebto Penn Kuupole described the project as an eye opener for the youth and something beneficial to the vulnerable. She said women doing banana business in the area are financially liberated and were no longer at the beck and call of their husbands.

The Nandom Municipal Agric Extension Officer, James Segtaa Vuuro, who was among the people that measured the land and offered technical support for the establishment of the banana plantation, pledged to continue to put his expertise at the disposal of the Foundation for it to achieve its objectives.

The Secretary of the Foundation, Dr Donatus Angnuureng observed that the project is aimed at enhancing socio-economic lives of the people of the area as well as developing Ghana in general.

Prof. Kuupole and his team also paid a courtesy call on the Chief of Ketuo, Naa John Yangyuoru.

The Kuupole Farms was a personal initiative in 2013, but when the Foundation was established in 2016, the farm was brought under the Foundation thereby losing its original identity.