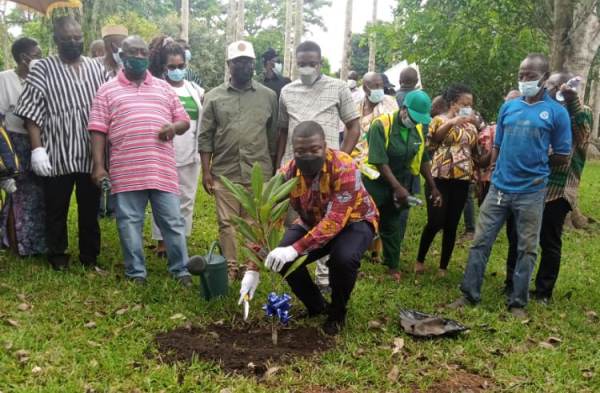 Weeks after the promulgation of the Green Ghana programme yet to be launched nationally, the agenda is spreading like wildfire across the country.

While launching the programme in Tema last week, the Greater Accra Regional Minister, Mr. Henry Quartey said it was a wake-up call. The First Lady Mrs. Rebecca Akufo-Addo in the programme launch on her behalf and the Rebecca Foundation at Aburi on Monday described it as the programme to restore the beautiful vegetation of Ghana.

At Tema, the Metropolitan Chief Executive, Felix Mensah Nii Anang-La, gave the assurance that President Akufo-Addo’s agenda to ensure the preservation of Ghana’s vegetative cover and natural eco-system was on course. Similar programmes are ongoing in all regions as an apt response to the Presidential call.

Nii Anang- La gave the assurance at a short ceremony at the Tema General Hospital ahead of the international commemoration of the need to plant trees to sustain the natural environment.

“As the saying goes, the last man dies when the last tree dies and this is why the President has put in place a comprehensive plan to make Ghana green again and I can assure you that the plan is unwaveringly on course,” this is according to the Tema MCE.

The ceremony had been a tree of life planting exercise at the Tema General Hospital with the MCE, the MP for Tema Central, Hanson Nii Noi Nortey, the Tema East MP, Isaac Ashai Odamtten,  and the Co-ordinator of Civil Society Organizations in Tema, Mr. Robert Bob Amiteye, as well as the Medical Director of the Tema General Hospital, Dr. Richard Anthony, planting symbolically trees on the theme: ‘Ecosystem Restoration – Restart, Reimagine, Recreate and Restore.’

According to the MCE, government had earmarked 11th June for a national launch of the 2021 tree planting exercise, but that Tema had taken the lead because the need for new trees resonates with Tema especially.

Most trees in the Metropolis he said were over 60 years old and that they had developed such deep muscled roots that were destroying utility lines and encumbering sewers among others and should therefore be replaced.

He said the Tema General Hospital had been chosen as the place for the exercise as it needed vegetative cover.

“Many of the illnesses reported at the Hospital are respiratory infections which are resultant from the continually degrading ecosystem in the Metropolis and so symbolically, planting trees at the General Hospital, is a way of showing the multitudinous benefits of trees.”

Others who planted trees at the ceremony were the Presiding Member of the Tema Metropolitan Assembly, who doubles as the National Dean of Presiding Members, Mr. Joseph Korto, the Gender Desk Officer of TMA, Mrs. Priscilla Obeng Gyabaa and the Assembly member of the Valco Electoral Area, Mrs. Adwoa Brago Asare.

The Tema MCE, Nii Anang-La, emphasised that greening the environment was an important priority to President Akufo-Addo, calling on all including; journalists, to join in the campaign to plant trees around the country. He said there was the need to treat the country’s oceans with care, bemoaning plastic pollution as dangerous.

The Member of Parliament for Tema East, Isaac Ashai Odamtten, who was also in attendance as a guest of honour, revealed that the Speaker of Parliament,  Alban Sumana Kingsford Bagbin, had enjoined all MPs to join in the national tree planting agenda and they were all ready to lead their constituencies in the greening agenda.

The Speaker was praised by the MP sense of responsibility for the Environment saying that it added to the maturity and leadership he brought to  Parliament.

He was grateful to the leadership of the Tema General Hospital and encouraged them to take good care of the trees planted.

The coordinator of the Programme, Robert  Amiteye, who is also the head of the Abibinsroma Foundation, also highlighted the need for the country to take good care of its oceans.