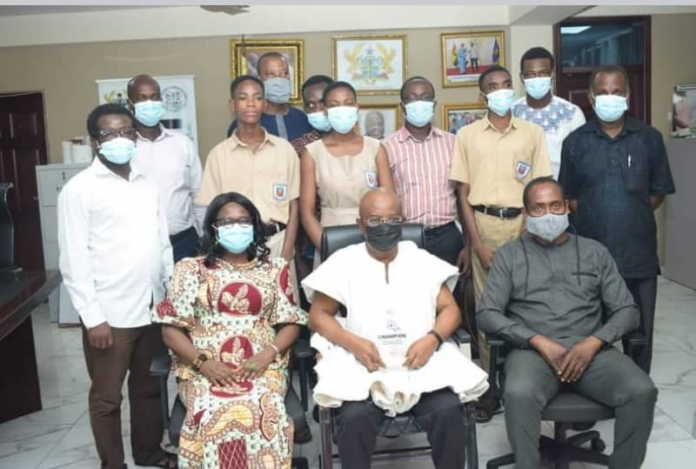 He said winning the national competition would glorify the Region as it would be the first time ever, and called for dedicated practice and preparation.

The Regional Minister made the call, when the Keta SHS team, who had won the zonal competition, presented the trophy to him in Ho.

He said it was possible to win the national trophy, and that the VRCC would facilitate the needed support, including; linkages with the Volta Development Forum, to aid their victory.

“I believe the national trophy is coming to Volta, and it will be brought by Keta SHS. We will make Volta proud at the National Level,” Dr Letsa said.

He advised the contestants and their coaches against complacency, saying they must not be “too over satisfied with the local victory.”

Regional Director of the GES, who led the team on the visit, Madam Afi Amafuga said to the Ghana News Agency (GNA) that she was full of excitement, especially as the contestants won with a higher margin.

She said the progress of the team would require the necessary support, which would include; a minibus to facilitate the movement of the team, as well as Wi-Fi facility for constant Internet access.

The Director also appealed for the coaches in the region to be motivated to ensure the right contestants were selected, and added that the education directorate would support other schools to excel at the competition.

She commended the Keta SHS team, saying they scored an impressive 73 marks in the first contest.

GNA was told that Francisca Lamini, the female among the team, sat for the Nov/Dec WASSCE while in her second academic year, and scored A in all subjects with Master Senyo Bright Gadzo and Lutterodt James being the other contestants.

Headmaster of KETASCO, Mr. Isaac Dzodzienyo expressed the School’s appreciation to the Minister for his personal interest in the development of the School.

He said his vision was to create an enabling condition for students to study and perform well in the quiz competition and beyond.

He however said the provision of internet connectivity and means of transport was a challenge that demanded urgent redress towards achieving their collective goal.