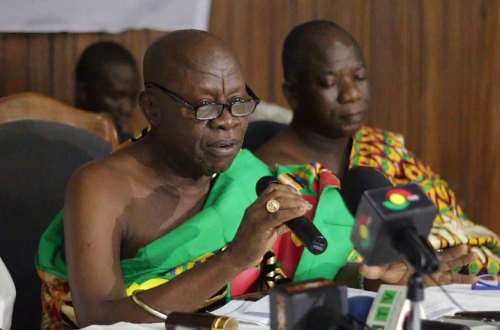 Speaking to the media at the Anhwiaso Palace, he noted that activities of illegal miners, mining companies and chainsaw operators had damaged the nation’s vegetation cover.

He said the initiative was the only way to restore the country’s lost vegetation.

As part of his commitment to the project, Ogyeahohoo Gyebi, who is also the President of the Western North Regional House of chiefs, pledged to supply five thousand trees for the exercise and called on the public to participate in the tree planting exercise.

The President of the House of Chiefs was of the view that one person should at least plant between five to ten trees on that faithful day to achieve the target for the exercise.

He said the current generation had the moral obligation to restore and sustainably manage the environment for posterity.

“When we destroy our environment, we threaten our very existence. When we protect it, we protect ourselves and posterity,” he said.

“We must endeavour to restore our relationship with nature by taking prudent steps to do the little we can as individuals and collectively as a community,” he added.

In that regard, Ogyeahohoo Gyebi called on traditional authorities to promote and uphold the Ghanaian cultural values that supported conservation.

He encouraged Ghanaians to engage in tree planting in their back yards to strengthen the linkage between nature and culture.

Ogyeahohoo Gyebi lauded the government for embarking on Green Ghana and the National Tree Planting Projects.

“It is a good example of how citizens can be charged to do their part and protect the environment,” he said.