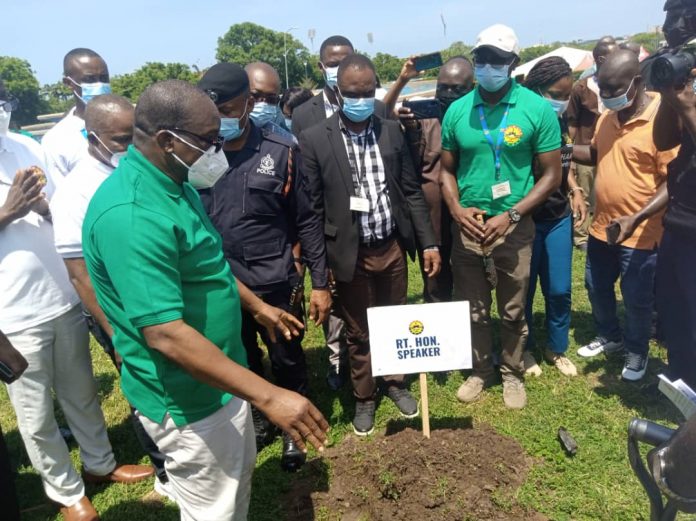 The Speaker of Parliament, Alban Bagbin, has pledged Parliament’s commitment to supporting the promotion and sustenance of the Green Ghana initiative.

President Akufo-Addo has declared Friday, June 11, as green Ghana day where at least five million trees are expected to be planted across the country by the close of day.

Mr. Bagbin made the promise when he led senior officials of Parliament in the tree planting exercise in Parliament.

The Speaker regretted that through reckless destructive practices, Ghana’s forest reserves have almost been depleted. He challenged Ghanaians to seize this opportunity not only to plant more trees, but also to nurture them to grow.

Meanwhile, as part of the Green Ghana Project, the Judicial Service joined in the nationwide tree planting exercise to help preserve the country’s vegetation and forest. The exercise at the Supreme Court was done by Justices of the Apex Court, the Judicial Secretary and Staff of the Service.

The Justices include Justice Jones Dotse who was the first to plant on behalf of the Chief Justice, followed by Justice Marful Sau, other Justices and then staff of the Service. Twenty-five trees including Royal Palm which will aid beautification and mature within a period of 30 to 40 years were planted.

Other species include the millettia which is a shade tree and will also take about 30 years and as well as the coconut dwarf with gestation period of 3 to 4 years.

Justice Jones Dotse lauded the initiative and asked that the trees be nurtured well. He said activities of galamsey operators destroy the vegetation hence the need to take good care of them.