Members of the parliamentary Select Committee on Environment Science and Technology has paid a working visit to Panbros Salt Industries and Empire Cement, a new cement factory being constructed along the Weija Road.

The MPs embarked on the tour in a bid to get first-hand information on some concerns raised by the salt company over the siting of the cement factory.

Panbros Salt Industries petitioned the Committee over the issue, claiming that the cement production could adversely affect its salt production.

Members of the Committee led by the Chairman, Dr. Emmanuel Marfo, MP for the Oforikrom constituency in the Ashanti Region made the first stop at the Empire Cement and were met on arrival by Nana Obokomatta IX, a partner of the facility who engaged the legislators and led them on a tour of the facility.

The next stop was at the Panbros Salt Industries, where the parliamentarians were taken on a tour led by the Managing Director, Mr. Michael Odartey Wellington.

Addressing the media after the tour, Chairman of the Parliament Select Committee on Environment Science and Technology, Dr. Emmanuel Marfo underscored the importance of the visit adding that the committee has the mandate to provide oversight of issues relating to the environment. 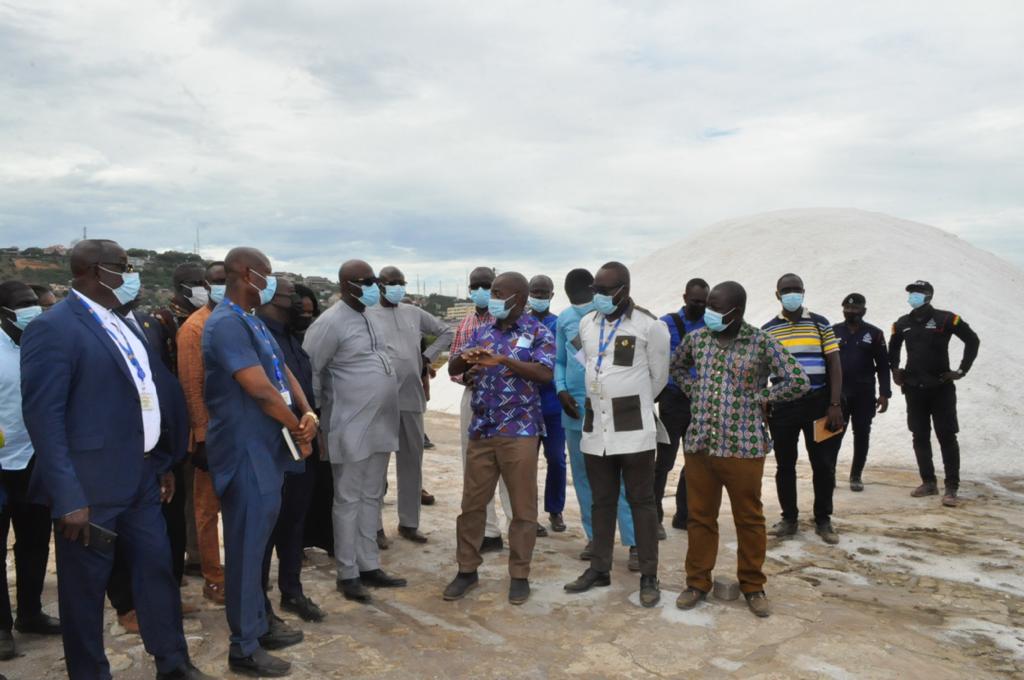 “We are here to have first-hand information as to whether the production of or bagging of cement, if it so happens, will have a potentially disastrous effect on the salt and the neighbourhood. Empire Cement and Panbros Salt have both taken us through their production process. We’ve asked questions and what is left are technical questions which require the Environmental Protection Agency (EPA), Standards Board and Food and Drugs Authority to assist the committee with a technical briefing then the committee will finalize and take a decision which will be made public”.

“For now, we have been told they only have a permit to do cement bag production, but there is a process to do bagging of cement. What is in contention is whether they will get a permit to bag cement, and EPA is the authority that gives the final permission. We’ve seen the distance between the two factories, and it’ll also be factored into our technical discussion,” he said.

“We’re certain in our mind that the final outcome will be good news to Ghanaians because we have kept insisting that a cement factory cannot be sited near a salt production because contamination will occur”.

“Panbros Salt has been here as far back as 1958 feeding Ghanaians with edible salt as such we cannot sit there to witness a situation where cement will be produced close to us, and we’re made to believe there’ll be a technology that will ensure no dust will be expelled into the atmosphere. It can never happen anywhere, and we’re yet to be convinced,” he added.

How we got here

Panbros Salt Industries Limited, the oldest and largest wholly-Ghanaian owned salt company, has since 2020 been complaining about the cement factory near its concession.

Panbros had accused the owners of the cement factory of forcibly taking part of its legally acquired land, a claim the company vehemently denied.

An earlier statement signed by Archibold Ato Paitoo, owner of the Empire Cement Limited, insisted that the land in question was given to the company by the allodia owners of the land.

President of the McCarthy Hill Residents Association, Mr. Eddie Quaynor also held a press conference to complain about the operations of the cement factory on the health of residents.

Mr. Quaynor explained that several petitions sent to the Environmental Protection Agency (EPA) to have the project halted yielded no positive results.

Mr. Quaynor said they will utilize all legal means to ensure the factory does not see the light of day as its operation will be too hazardous to the health and well-being of residents at McCarthy Hill, Tetegu, Mallam, Gbawe and Weija.