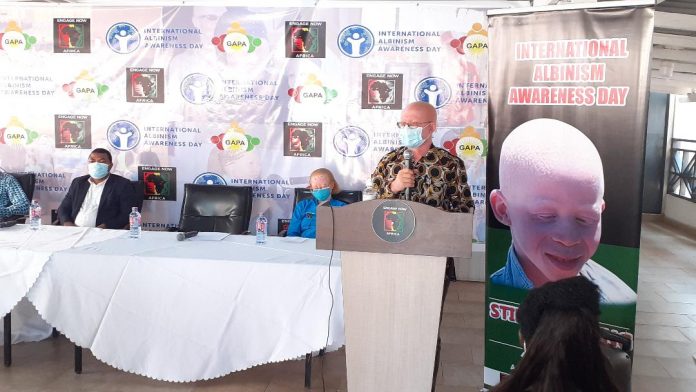 The Ghana Association of Persons with Albinism (GAPA), has appealed to government to include sun care products, dermatological and optical services on the National Health Insurance Scheme’s drugs and services list.

That, the Association said, would mitigate the socio-economic challenges faced by its members since some were unemployed and could not afford such services.

Mr Newton Kwabla Katseku, the Executive Director of GAPA, said this at a press briefing to mark the Seventh International Albinism Awareness Day, which falls on June 13.

The programme is organised in collaboration with Engage Now Africa, a Non-Governmental Organisation, on the theme: “Strength Beyond All Odds”.

The Day was adopted by the United Nations to, among other things, encourage member states to continue with efforts to protect and preserve the rights to life and security of persons with albinism.

Mr Katseku called on government to mainstream the needs of Albinism and disability issues at all levels of the educational system.

He said some textbooks should be printed in large font and persons with albinism be allowed to sit closer to chalkboards in classrooms because of their challenges with visibility.

“Students with albinism should be allowed some extra time during examinations and allocate enough resources to effectively implement the Inclusive Education Policy and create opportunities for all to have better education,” he said.

Mr Katseku called for support to get a reliable and accurate database of all persons with albinism to ensure timely dissemination of information and provision of support services.

He urged government to ratify the African Disability Protocol, which sought to promote and protect the rights of persons with disability.

“We call on the Ministry of Gender, Children and Social Protection to fully domesticate and implement the Regional Action Plan on Albinism in Africa, adopted by the African Union,” he said.

Mr Katseku called on the Ministry of Chieftaincy and Culture for an inter-ministerial dialogue with relevant institutions to end cultural banishment of persons with albinism in most communities in the country.

Mr Francis Ansah, the Director, Engage Now Africa, said it was vital to protect persons with albinism from dehumanisation, which resulted in ritual killings and abuses.

He called on government and other corporate bodies to intervene on the health of persons with albinism since some were prone to skin cancer diseases.