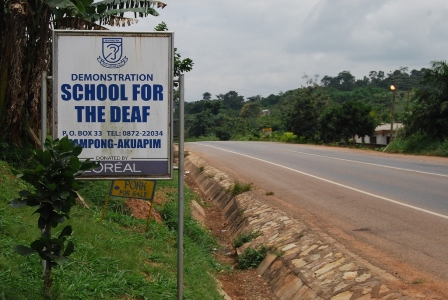 The Mampong demonstration school for the deaf and blind has received audiological equipment valued at 16,500 cedis from two non-profit organisations: Dorothy’s Hope Incorporated and Queen Bee Insurance Services all based in the United States of America.

The donation is to help reduce the student’s impediments to hearing. This comes as a backdrop to the lack of teaching and learning aids coupled with lack of first aid drugs affecting the demonstration school for the deaf in Mampong Akuapem in the eastern region of Ghana.

According to the authorities of the school, these are major challenges for which they need support to surmount so as to enhance effective teaching and learning in the school.

The Demonstration School for the deaf (Demodeaf) is a public basic special school established about fifty years ago by Andrew Foster, an African American for education for deaf children to produce deaf scholars who would be socially, emotionally, economically, psychologically, and academically upright. The school which started in 1967 with 39 students now has a students population of 466 with 270 males and 197 females.

The demonstration school for the deaf is mainly boarding and takes care of pupils at the creche, primary, Junior high, vocational, and technical levels of education.

To address some of these issues, Dorothy’s Hope Incorporated a non-profit organisation in partnership with Queen Bee Insurance Services all based in the United States of America has made delivery of audiological equipment in the tune of 16 thousand five hundred cedis to the school.

Leading the group was the former Rector of the University of Education Winneba, Professor Nathaniel Pecku who told GBC news that the delivery of the audiological equipment to the school is to reduce the impediments of learning faced by students and children whose hearing difficulties and impairments impede their learning process and life in general.

After receiving the equipment, the headteacher of the school Mr. Setunte Ametewee said prior to the donation, the school did not have audiological equipment hence, expressed gratitude to Dorothy’s Hope Incorporated for the kind support.

The head teacher called on other individuals and organizations to extend their kind support to the demonstration school for the deaf and blind.