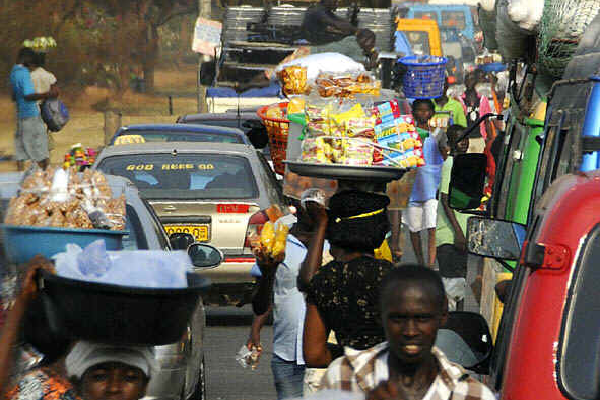 A stretch spanning not more than 100 meters have become a source of palpable stress and anxiety for many.

This is the plight of residents of communities who use ‘Ablekuma Curve’, a popular intersection on the Awoshie-Pokuase highway.

The intersection is witnessing a complete breakdown of law and order as the area has been turned into a market and bus terminal much to the displeasure of commuters.

Ablekuma in Accra has lately, been buzzing with a lot of economic activities and modern housing units. The Awoshie Anyaa highway stretch offers relief for motorists avoiding traffic congestion on the N1.

Many have attributed this progression evidently to the opening of the Awoshie-Pokuase highway which passes through Ablekuma.

However, an intersection on this highway popularly called ‘Ablekuma Curve’, which connects several adjoining communities has been turned into a market and bus terminal, causing heavy traffic on the stretch.

The traffic is so severe that residents have been left frustrated at the growing breakdown of law and order. The continuous honking has done little to deter commercial vehicles from dropping off and encouraging passengers to board right in the middle of the road.

Pedestrians have to compete with motorists for space on the main road as hawkers have completely taken over the walk ways.

As of 11:30 am when I got there, traffic was so heavy that it took 55 minutes for me to get to the local GPRTU office. A distance which should not take more than five minutes.

Executives of the local union acknowledged the problem and the consequences it has on the residents but blamed it on the Ga Central Municipal Assembly.

Speaking to GBC NEWS James Koomson who speaks for the union said they have been putting in efforts to help address the challenge.

He said that “both trotro and private cars do not have a bus stop. So the drivers always end up parking on one side of the double road. This leads to heavy vehicular traffic.

There is an alternative route which is an untarred road with pot-holes and with the nature of the road, drivers are compelled to slow down or risk damaging their cars.

This will help ease the traffic situation on the Ablekuma curve.” He intimated.