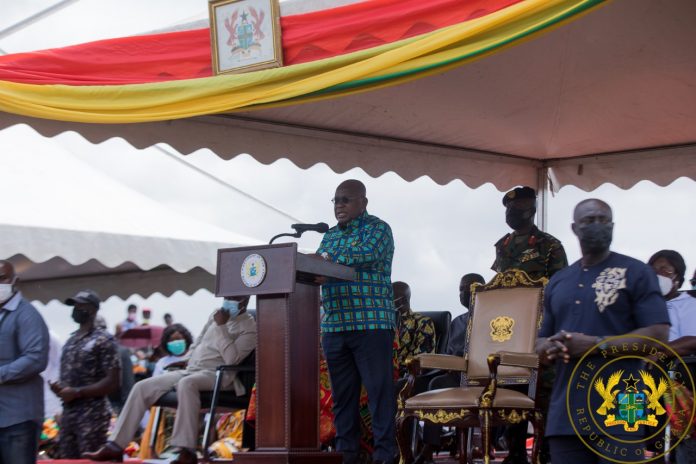 President Akufo-Addo has cut the sod for work to commence on the construction of 88 District hospitals, seven regional Hospitals, and two Psychiatric hospitals across the country.

Christened Agenda 111, the government seeks to build hospitals in districts without such facilities and also put up Regional Hospitals in the newly created 6 Regions.

Speaking at Atwima Trede in the Ashanti Region to signify the start of the project, President Akufo-Addo called for the cooperation of every Ghanaian in the implementation of the project.

The Project, which will cost $16.8 million, will be completed within 18 months. It will be fitted with an Out Patient’s Department, OPD, Dental, Maternal and Child Health Facilities among others.

So far 88 sites have been secured and the government is working on the remaining 13 sites.

The President noted that, “25,000 jobs would be created during the construction and design stages of the project, and a further 20,000 jobs created for Health professionals when the project is completed.’’

President Akufo-Addo said Agenda 111 provides, “a significant domestic impetus into local creation of wealth as domestic hand would be employed to a large extent in the execution of the projects.”

Above all, Agenda 111 is very relevant in, “positioning Ghana as a medical destination for our neighbours, an improved health care hub for direct investment and for tourism promotion’’, President Akufo-Addo stated.

Construction of the hospitals is expected to further revitalize Ghana’s Health Care Delivery.

The Regional Minister, Simon Osei Mensah in a welcome speech spoke of President Akufo Addo’s commitment to achieving quality health care delivery goals. He said the provision of the hospitals is a clear demonstration of the will; “to minimize inequalities in the system, and ensure the expected health outcomes, by making health care delivery better for all’’.

Asahtihene, Otumfuo Osei Tutu in a message, expressed gratitude to the President Akufo Addo for making health care delivery a priority agenda during his tenure. He said the hospital facility would remain a cherished property to the People of Ashanti and Ghana as a whole.