Ayine in trouble again; Supreme Court drags him to GLC over ‘disparaging comments’

The Supreme Court has petitioned the Disciplinary Committee of the General Legal Council to investigate alleged “disparaging comments” made by a former Deputy Attorney-General, Dominic Ayine over the independence of the judiciary.

A letter sighted by Citi News states that Dominic Ayine made this claim with reference to the Supreme Court’s conduct in the 2020 presidential election petition.

The letter addressed to the Chairman of the Disciplinary Committee of the General Legal Council, accused Dr. Ayine of stating that “the Supreme Court’s failure to apply the rules of procedures as well as the consistent and continuous dismissal of the petitioners’ applications or reliefs were the basis of his assertion”.

These comments were made during a panel discussion on “Presidential Election Petitions and their Impact on Africa’s Democracy”.

The Supreme Court in its petition reminded the Disciplinary Committee of a similar case where the Bolgatanga East legislator made ‘scandalous’ statements of the court, during the 2020 presidential election petition where “Dr. Ayine apologized for profusely, which were unbecoming of a lawyer of his standing and a former Deputy Attorney-General.”

In view of this, “His Lordship the Chief Justice, therefore, finds his alleged disparaging comments totally unacceptable and would like you to investigate this matter further”, it concluded. 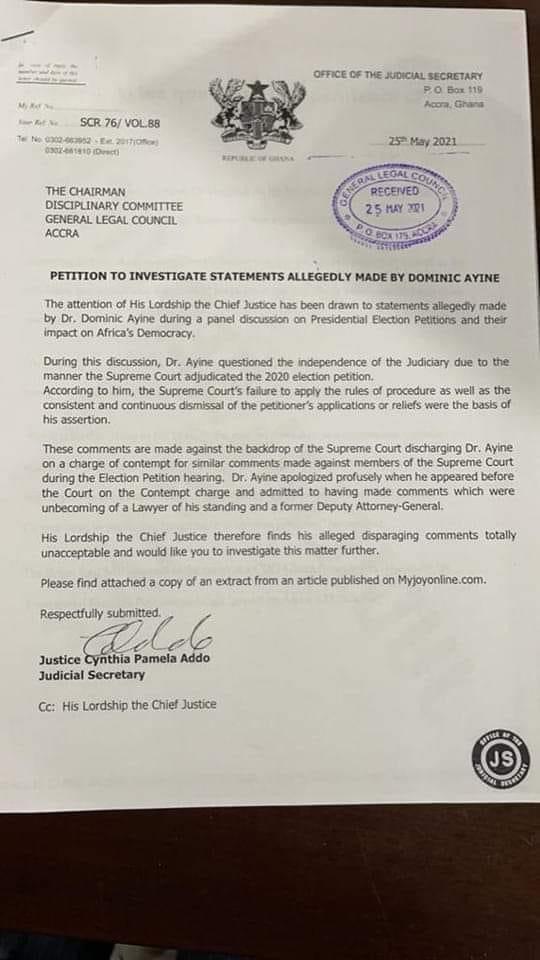 Dr. Ayine was charged with contempt following words he used in his commentary on the election petition case.

He was ordered to render a public apology; using the same medium through which he was found to have scandalized the court and brought its name into disrepute.

The court’s order was subsequently complied with as Dr. Ayine rendered a public apology to both the bench and the bar for undermining the sanctity of the apex court.

Chief Justice Kwasi Anin-Yeboah noted that the contemner had purged himself as ordered and would be discharged without any further punishment.

The lead counsel for Dr. Ayine, Frank Becheem said the former Deputy Attorney General had learned his lesson and will sin no more.

Also appearing in solidarity with Dr. Ayine was lead counsel for the Electoral Commission in the election petition matter, Justine Amenuvor.

Describing Dr. Ayine as his classmate, best man, and close friend, Mr. Amenuvor thanked the court for its magnanimity towards the former Deputy Attorney General.

President administers Oaths of Allegiance, Secrecy and Office to 21 envoys