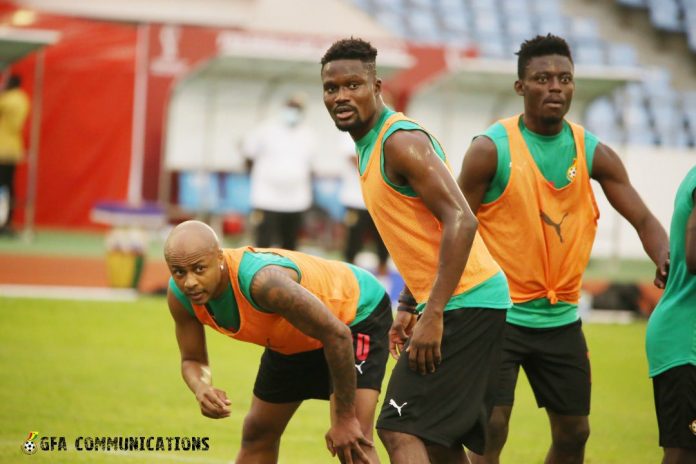 The Black Stars of Ghana are poised for this evening’s match with the Walia of Ethiopia in the opening Group G encounter of the 2022 FIFA World Cup Qualifiers. The two countries were pitted in the same group of the African Qualifiers at the end of the draw together with South Africa and Zimbabwe.

Morale in Camp of the Black Stars seems to be high as almost all the players are in high spirits for the game.

Since Tuesday, Ghana’s squad had been training for the game in anticipation of putting up a good show by scoring more goals to qualify for Qatar 2022. Our Sports Correspondent, Jacob Narh Nortah reports that the Black Stars are really poised for the game knowing the task ahead.

”They have trained very well because they do not want to leave any stone unturned”.

Due to the Covid-19 restrictions, few people will be allowed into the Cape Coast Stadium.

Sports Commentator Benjamin Willie Graham says Ghana has a certain history when it comes to football as this is not the first time both teams are playing.

” In 2019 both teams played during the AFCON Qualifiers in Addis Ababa where Ghana scored 2 nil against Ethiopia. Giving his analysis for today’s encounter between the Black Stars and the Walia of Ethiopia, Mr. Willie Graham noted that right of positions are very necessary during qualifiers, adding that most Coaches try to do last-minute changes not to jeopardize their chances”.

As expected, morale in Camp of the Senior National team, the Black Stars seems to be high as almost all the players are in high spirits for the game. Coach CK Akonnor says it will be a 3-0 win against the Ethiopians and nothing else.

” I want to appeal to the Nation, football loving fans that they should come in their numbers, those who will be able to come should do that and those who will be watching the game at home should keep their fingers cross for us, this is our moment, this is our time, we need your support to make it, without you, it’s always difficult. Under normal circumstances, we would have only 30 players, but we are not in normal times so, it is important to have that squad. We know the kind of players that will help us in this game and that of South Africa, and so we are preparing, and we know if we do it very well we will be successful and carry the day”, stated Coach C.K Akunor.

Dede Ayew is the Captain of the Black Stars. He pledges the players resolve to make Ghanaians proud.

” Honestly I’m very happy with the boys that are here, we’ve worked really well, we have been camping since Monday, everything is ok, there is a lot of talent here. I’m convinced that the players are going to represent the nation. We are ready to make the nation proud. We have a lot of young players in the squad, and as the Senior players guided me, we are going to guide them and show them the way to be ready to take over the team. To be frank the boys are very talented and are determined to succeed, so with patience we will succeed,” Captain Ayew stated.

Meanwhile, there have been mixed reactions from a cross section of the public on Ghana’s qualifying match against Ethiopia this evening. Most of the people who spoke to GBC News say they do not anticipate any major victory as the Black Stars have continuously broken their hearts.

” Well, with the game today I’m not expecting much from the Black Stars honestly, it may be a goalless draw or one nil against our opponent, we don’t score many goals of late so I honestly don’t expect much from them,” a fan said.

” I’m not expecting anything from them, I don’t even know they are playing today”, another football fan stated.

”My expectation from the Black Stars today is victory, I want to see a very neat game, one that I can really enjoy and I hope at the end of the 90 minutes we will score not less than 3 goals,” according to this fan.

” I think the Black Stars are going to perform well but we are expecting more from them today,” according to one football fan.

Ethiopia’s Coach, Wubetu Abate had also been commenting on the match.

” We had an experience with Ghana and we know they have a good and strong team but currently we are building our team for the next 3 to 4 years. We are in the process to build our team, we know that our opponent has good players but hopefully we are ready to top. We know that they have foreign best players but when you see our side they are local best, they all have talent and we are confident to do something good on the field,” the Ethiopian Coach stated.

Addressing the increasing risk of flooding in Ghana; a shared responsibility