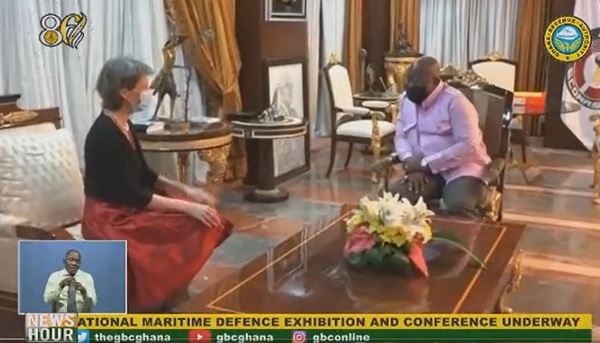 Former President of the Swiss Confederation, Simonetta Sommaruga, has paid a courtesy call on President Akufo-Addo as part of a two-day visit to the country.

The leaders pledged to strengthen bonds of co-operation between the two countries in the areas of environmental protection, education, energy among others.

Madam Simonetta Sommaruga, who is also the current Swiss Minister for Environment, Traffic, Energy and Communications, arrived in the country on Tuesday, July 6,  after a visit to Senegal as part of a two nation tour of Africa.

She expressed delight at being the guest of President Akufo-Addo. Madam Sommaruga says areas of cooperation between Ghana and Switzerland include, energy, climate change, environmental protection as well as the private sector.

President Akufo-Addo said Ghana is looking forward to strengthening cooperation and improve trade and investment relations with the Swiss.

The President mentioned the importance of Cocoa in Ghana’s relations with the Swiss and said there is a new partnership in energy and urban planning and development in Ghana.

The former Swiss President had earlier attended a climate change event at the Ministry of Science, Technology and Innovation in Accra.

Some foreign nationals refuse to be enumerated under Census in Kumasi