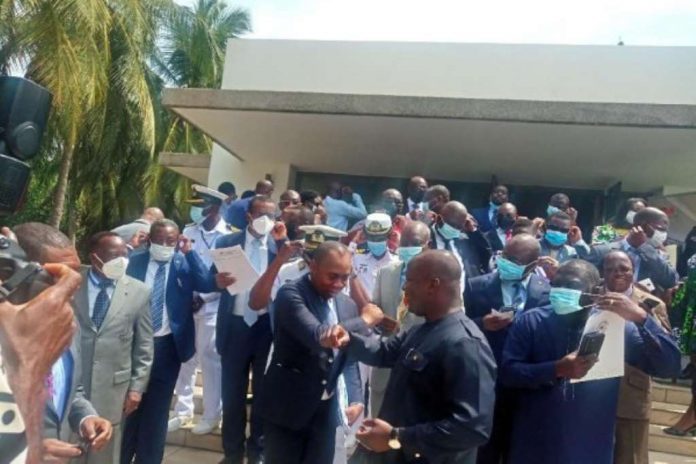 A meeting on Ghana and Togo Maritime Boundary Negotiations is underway in Accra.

The three-day programme aims at amicably resolving outstanding issues on the delimitation of the maritime boundary between the two neighboring countries.

Minister of Lands and Natural Resources, Samuel Abu Jinapor is leading the Seventh Round of the Joint Negotiations Meeting.

So far, the Ghana-Togo Maritime Technical Committee has agreed on a roadmap for the negotiations on the delimitation of the common maritime boundaries.

Minister for Land and Natural Resources Abu Jinapor made reference to Article 33 of the UN Charter which has always used direct negotiations in addressing unresolved border issues.

He said both countries have been enjoined by the UN Convention on the Law of the Sea (UNCLOS), which both Ghana and Togo signed ontoin 1982.

Mr Jinapor said the provisional arrangements, when agreed to at the session, would be adopted by both countries and shall remain in force whilst negotiations continue in good faith to resolve the substantive issue.

For his part, the Togolese Minister of Marine Economy, Fisheries and Coastal Protection Mr. Kokou Edem Tengue said because of the goodwill and commitment shown by both countries, he is optimistic they would succeed in resolving the issue of delimitation of their maritime borders.

The Coordinator, Ghana Boundary Commission Brigadier General Emmanuel Kotia speaking with GBCNEWS said the success of the Joint Ghana-Togo Maritime Boundary Negotiations is imperative for the peace, security and economic advancement of the two countries.

President Akufo-Addo and President Faure Gnassingbein 2018 agreed to peacefully coordinate their efforts and allow international law and standards to guide the delimitation of the maritime boundary between Ghana and Togo.

Use laid down processes to organise demo