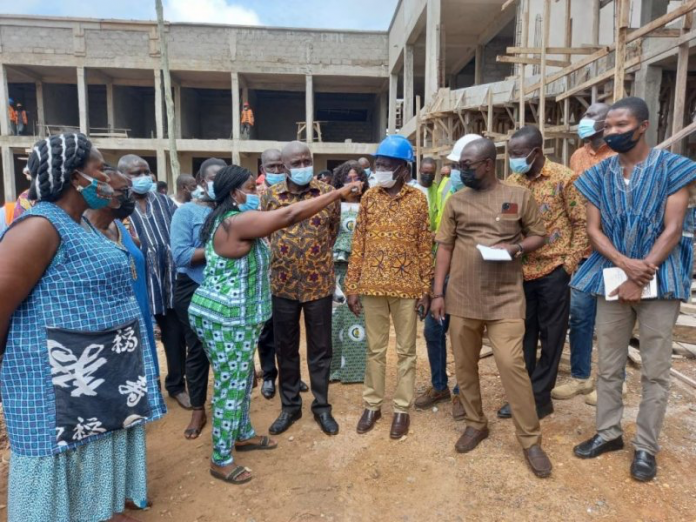 Mr Dan Botwe, Minister of Local Government, Decentralisation and Rural Development has said the infrastructural projects in the Volta region showed that the government was making sure the people got what they deserved.

He said it was also to improve the living conditions of the people.

He said it was also to improve the living conditions of the people.

Mr Botwe who inspected construction works on a modern market in Hohoe as part of a three-day visit to the Volta and Oti regions commended the contractors for work so far undertaken on the structure and urged them to carry out good quality work and finish on time.

The Minister said they were monitoring efficient use of the money and time was of essence in regards to executing and completing the project adding that the Ministry had a loan from the World Bank for urban development in 25 Municipalities in Ghana including; the Ho and Hohoe Municipalities.
Mr Botwe said additional funding or support would be available if efficient use of money and timeliness were met and noted that Hohoe had been known as a thriving business environment and the market would help it continue in that regard.
He said he was happy that all stakeholders were involved in the ongoing works on the facility and urged them to continue.
Mr Andrews Teddy Ofori, Hohoe Municipal Chief Executive (MCE), said the Assembly had been adjudged the best since 2017 and expressed gratitude to all stakeholders, especially traditional leaders, for their immense support through site meeting attendance.

Togbe Adzofuwusu IV, the Divisional Chief of Gbi-Atabu, expressed gratitude to the staff of the Assembly whose efforts had led to the progress of the project.

He said they would continue to play their roles as stakeholders to make sure a good work is carried out.
J. A. Biney & Co. Limited, John Mork Construction and Trading Limited and Crown of Victory Company Limited are the construction firms undertaking works on the market.
The contractors have completed 80 to 85 per cent works on 106 lockable stores, 144 sheds, a warehouse, creche, health, police and fire posts.

Mr Dan Botwe also interacted with staff of the Hohoe Municipal Assembly and urged them to work hard to enable the Assembly pass its District Assemblies Performance Assessment Tool.