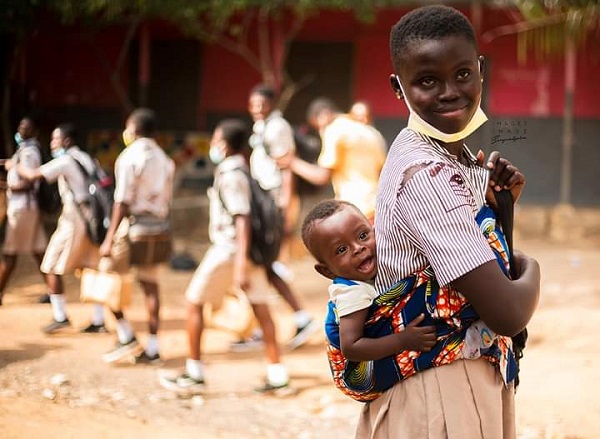 Following the Broadcast on GTV Breakfast Show on Monday, September 6, of the predicament of a 17-year-old Ghanaian student who defied the odds and returned to school with her 10-months old son, Vice President Mahamudu Bawumia has donated some food items and provided accommodation to the deprived 17-year-old Rita Awuni.

She is to choose an apartment of her choice and closer to her school. The teenage orphan returned to school after giving birth to her son, defying the social stigma and stereotype to continue her education.

“The new mother gave birth to her son, Sampson Awuni, and soon returned to school in February 2021,” a Ghanaian Photojournalist, Senyuiedzorm Adadevoh shared in a Facebook post.

Speaking on the Breakfast show, Special Aide to the Vice President, Dr. Kabiru Tia Mahama said after watching the program, the Vice President was touched and has thus directed the Department of Social Welfare to put in place measures to ensure the safety of the young mother and her son.

The Vice President commended her determination that despite her predicament she is still fighting to further her education. He asked that Rita be linked to the Department of Social Welfare for upkeep and monitoring.

“The Vice President believes that as a country the system must work and they should cater for some of these particular things when they do crop up. But hadn’t heard the story, he quickly directed that I get in touch with the Department of Social Welfare to see what they could do to support the young lady. I was saying, but, one thing that stands out, one thing that was identified after we heard his story was that the lady had no place to lay her head and that the Vice President has directed that we get her a nice apartment the location of her choice and also closer to her school, where the young lady and the child could lay their heads and also provide her with some food stuff and provision. In the meantime, we call on the Department of Social Welfare to integrate her into the system,’’ Dr. Kabiru Tia Mahama stated.

He said the Vice President also went far to reach out to her family.

“In fact, the Vice President did not even stop there, he tried to reach out to the family of the young lady back in the North. We found her Grandmother, who is referred to as, Mummy Soldier, that’s the Grandmother of the lady and the Vice President tried to get in touch with her to actually explain circumstances under which this young lady got herself into this particular situation. All that together created empathy and sympathy and the mind of the Vice President that prompted his action, so, basically we are in touch with the family, we are also even looking if the lady wants to reintegrate where the child’s father’s family because we believe in the idea of fostering even if the lady is off and how do we put her in a foster parent rather than putting her on the street we are looking at other options, that the Social Welfare System can take care of her and her child while she is in school,’’ Special Aide to the Vice President, Dr. Kabiru Tia Mahama noted.

The teenage mother, Rita who was on the #GTVBreakfast, was visibly moved with emotions and was also full of gratitude to the Vice President and showered blessings and praises upon him.

“God bless him, I am very happy, all my suffering has come to an end, I can now give my baby a good bath, and put him to sleep in a comfortable bed,’’ she said.

Rita also thanked her Headmistress, Staff of her school and the Ghana Broadcasting Corporation, and Management, and the entire country for supporting her in time of difficulty, with a promise to stay in school and ensure that her future dreams become a reality.

Rita found herself pregnant, as a teenager and had to return to school after childbirth. Her story was told through the lenses of a Photographer, Senyuiedzorm Adadevoh, who had empathy because Rita was in school uniform with her baby at her back when she was discovered.

She slept in the streets and sold water to take care of the baby after classes. The Photographer called for stringent laws to punish men who made teenage girls pregnant.

This, she believed, would serve as a deterrent to others. Senyuiedzorm Adadevoh was happy that Ghanaians responded positively to the call for support. GBC News’ Clara Mlalo, who also went with a news crew and Camera to document Rita’s plight was also full of surprise that the story got a lot of attention.

“Journalism is about impacting lives and social change, and I am happy that it all turned out this way, the lesson for me, which I would like to share is that, teenagers or young people should stay away from pre-marital Sex.”