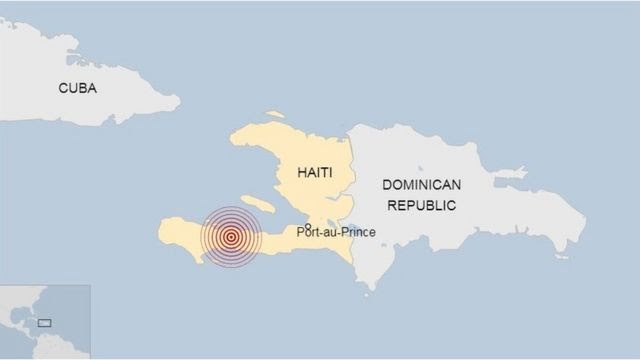 A powerful earthquake has struck the Caribbean nation of Haiti.

The 7.2-magnitude quake hit the west of the country, with its epicentre about 12km (7.5 miles) from the town of Saint-Louis du Sud, according to the US Geological Survey (USGS).

Officials told reporters there had been fatalities, but the toll is unclear. Images on social media showed buildings reduced to rubble.

Haiti is still recovering from a devastating 2010 earthquake.

The USGS said Saturday’s quake was recorded at a depth of about 10km. Its epicentre was some 150km from the densely populated capital of Port-au-Prince.

The earthquake was felt across much of the Caribbean.

“I can confirm that there are deaths, but I don’t yet have an exact toll,” Jerry Chandler, Haiti’s director of civil protection, told AFP news agency.

“Lots of homes are destroyed, people are dead and some are at the hospital,” Christella Saint Hilaire, who lives near the epicentre, told reporters.

Naomi Verneus, a 34-year-old resident of the capital Port-au-Prince, told the Associated Press news agency she was woken up by the earthquake and that her bed was shaking.

“I woke up and didn’t have time to put my shoes on. We lived the 2010 earthquake and all I could do was run. I later remembered my two kids and my mother were still inside. My neighbour went in and told them to get out. We ran to the street,” she said.

The 2010 earthquake in Haiti killed more than 200,000 people and caused extensive damage to infrastructure and the economy.

Saturday’s earthquake comes amid a political crisis in the country, following the assassination of its president last month.