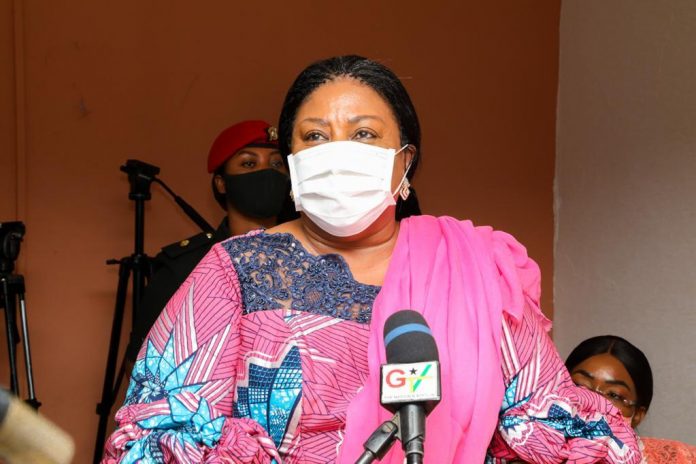 The First Lady Mrs Rebecca Akufo-Addo has asked members of the Childhood Cancer Society of Ghana (CCSG) to continue supporting children with cancers to help them survive.

She said children were among the most vulnerable in every society and needed support because they contributed in making communities and the nation productive and sustainable.

The First Lady said this via zoom at the inauguration ceremony of Childhood Cancer Society of Ghana (CCSG).

It was on the theme, “Leveraging the Multidisciplinary Paediatric Oncology Team for Holistic Care and Optimal Outcomes.”

She said unfortunately, those children were now at risk of ill-health and death from non-communicable diseases such as cancer and called for collaborative multi-stakeholder efforts.

The CCSG, comprising of health professionals and health workers, is mandated to advocate at the national level to ensure that children were able to access effective quality lifesaving care wherever they are.

It will also support the implementation of the National Childhood Cancer Strategy, which is at the draft stage.

The CCSG is expected to undertake awareness creation, facilitate capacity building, participate in policy development and come up with ingenious ways of promoting universal health coverage for children with cancer.

The First Lady said challenges of late presentation of cases, treatment abandonment and unnecessary suffering of children would soon be a thing of the past.

Mrs Akufo Addo noted that out of the estimated 400,000 children who developed cancers globally each year, 80 per cent resided in low and middle-income countries (LMICs) such as Ghana.

An estimated 90 per cent of the deaths also occur in LMICs.

A child with cancer in a high-income country would have over 80 per cent chance of cure whereas in LMICs, this is between 15-45 per cent with about 44 per cent of children undiagnosed globally.

Currently out of the estimated over 1,200 children that would be expected to develop cancer annually in Ghana, only about 450 are diagnosed.

“Unfortunately this means the majority are unable to access specialist services and most likely die, unaccounted for,” she stated.

The First Lady said with only five Paediatric Oncologists who were team leaders for care of such children, the situation seemed quite dire but the good news was that over the next two years, Ghana would produce eight more who were presently undergoing training.

“With the postgraduate medical colleges producing other critical members of the multidisciplinary teams, we are looking forward to more fully functional comprehensive treatment centres in the near future.”

She urged national, international and individual stakeholders to contribute appropriately to help CCSG achieve its goals for the benefit of all children affected with cancer in the country.

Dr Patrick Kuma-Aboagye, the Director-General of the Ghana Health Service, called for the implementation of the “rovering system” of paediatric oncology specialists.

He said by that system, instead of assigning the very limited paediatric oncologist to facilities, they could be assigned to catchment areas and encouraged them to be on call for those catchment areas.

The Director-General said leveraging on ICT in that regard would come in handy and that in the medium to long term, the granting of paid study leaves and scholarships to entice residency enrolments in the speciality area was a must.