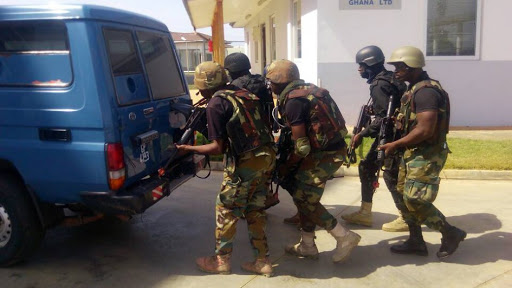 The Yendi National Commission For Civic Education (NCCE), has intensified sensitisation on preventing terrorism in Ghana and the Yendi municipality of Northern Region in particular.

Ghana’s Anti-Terrorism law Act 762 of 2008 seeks to combat terrorism, support and detect acts of terrorism to protect the resources and financial services of Ghana from being used to commit terrorist acts and to protect the rights of people in Ghana to live in peace, freedom and security.

Mr. Osuman Kasim, the Yendi NCCE Director said this when they called on Ya-Na Abukari II the Overlord of Dagbon at the Gbewaa Palace to introduce the new Director and to inform him about the educational programme.

He said it was important for the public to report all people with questionable characters to the local law enforcement or security authorities for action and there was the need for them to be vigilant in their homes and report suspicious activities or crimes without fear of retribution.

Mr Kasim said a research carried out by NCCE revealed that violent and extremist were out to destroy some of West African Countries that had nothing to do with democracy as they were targeting Ghana through its borders with neighboring countries of Burking Faso, Togo, Cote-d’Ivoire amongst others.

He said the exercise was sponsored by the European Union (EU) to help NCCE to carry out the sensitization of the public and appealed to Ya-Na to call on Civil Society Organizations, (CSOs), and politicians to support NCCE to carry out its constitutional mandate.

YA-Na Abukari II advised the new officer to work hard in collaboration with the chiefs and called on government to ensure that all convicted criminals especially armed robbers were imprisoned to reduce the fear of terrorism.
He urged the NCCE to educate people along the country’s borders within their neighboring countries.

In a related development, the Kuga Na Abdulai Adam II at his palace reminded the officials of NCCE that their work was just like the chiefs who sensitized their people on programmes and policies of the Government when the need arises.

He said it was unfortunate that during the Population and Housing Census exercise the chiefs were not pre-informed to sensitize their people and chiefs adding it was important the information got to the chiefs before any exercise started.
Mr Kasim said the extremists used the unemployed youth to carry out their criminal activities and NCCE was working with chiefs, the opinion leaders and other security groups to sensitize the public.

He also met the military, the National Intelligence Bureau (NIB) to brief them about the programme to be carried out in the area.

Pilot registration of some Cocoa farmers for pensions begins on Monday, August 23