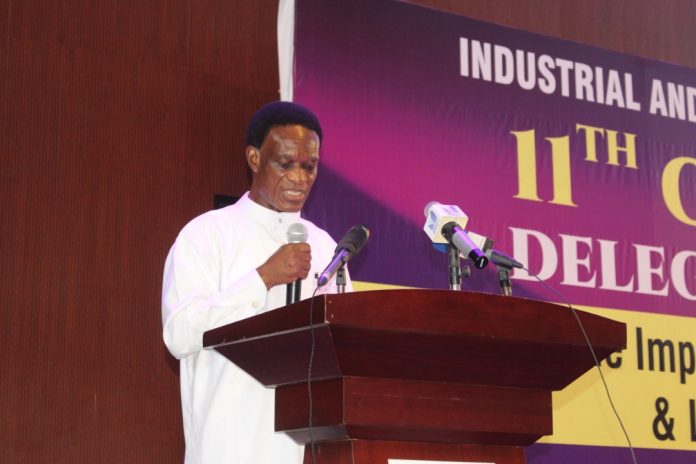 The newly elected General Secretary of the Industrial and Commercial Workers Union, ICU, Morgan Ayawine, has promised to adopt the principle of action speaks louder than words in seeking better conditions of service for Ghanaian workers. He said the new national officers of the ICU are poised to sustain the gains made by trade unionists over the years, through informed strategic decisions and policies in the union building efforts. Mr. Ayawine, said this when he was sworn-in together with six other national officers for a four-year term, at the ICU’s 11th Quadrennial Delegates’ Conference, held at the University of Professional Studies, Accra.

Mr. Banimah, and Mr. Ananga were the immediate past Deputy General Secretary in-charge Administration and Tema Regional Officer of the ICU-Ghana respectively,

The 3-day Conference (25th to 27th August 2021), which was attended by more than 300 delegates from across the country, was on the theme: The Impact of COVID-19 Pandemic on Business and Labour: The Role of Social Partners.

Mr. Ayawine is the 9th General Secretary of the ICU-Ghana which was founded 61 years ago (25th May, 1960), promised to collaborate with social partners, especially employers, to attain the ultimate goal of increased productivity for socio-economic development.

“We shall adopt the principle and maxim of action that speaks louder than words as we are poised to ensure a quick turn around and work in progress. In order the sustain the gains made by the union over the years, we are going to follow the tried and tested pathway that has been charted by my predecessors General Secretaries, and would especially tap into the knowledge and expertise of the immediate past General Secretary in the person of Comrade Solomon Stephen Ashalley Kotei, and other resourceful past leaders as may be appropriate, to inform our strategic decisions and policies in our union building efforts and quality service to our members in fulfillment of the vision and mission of the union. Since we are not in normal times, we would need to collaborate seriously and effectively with our social partners (employers) more than ever before to attain the ultimate goal of increased production and productivity at the workplace for our mutual benefit and more importantly, contribute our quota to the socio-economic development of our country Ghana’’, the new ICU General Secretary stated.

Mr. Ayawine, tasked the Union’s Field Officers and Staff to organize for more membership, and reiterated the need for the fundamental trade union rights of workers to be respected to further deepen the industrial harmony in the country for sustainable growth.  He also encouraged workers to strictly adhere to the safety protocols in order to stay healthy and alive in the challenging times of the COVID-19 pandemic.

“Field Officers and staff of the union are hereby directed to rededicate yourselves in order to organize more and more members and render quality services to them with speed and alacrity. To achieve this, Brother Chairman, the fundamental human rights, trade union rights of workers must be respected and upheld in accordance with the laws of the land, and by this we are good to go in deepening the industrial peace and harmony at the workplace in particular and the country in general, for sustainable growth and development of the national economy.  Let me remind all of us about the fact that the “monstrous”, COVID-19 pandemic continues to change its form and character and therefore we must strictly adhere to the safety protocols in order to stay healthy and alive, because we need a healthy workforce to be able to turn things around, so that our negotiations at the negotiation table will be meaningful and beneficial to us as social partners’’, he stated.

The new ICU-Ghana General Secretary, paid tribute to the past General Secretaries who he described as fine gentlemen who laid a rock-solid foundation for the current national leadership of the Industrial and Commercial Workers Union, to continue laying on the blocks that they have already fixed on it.

The new National Chairman, Alhaji Nuru-Deen Alhassan, thanked the delegates for demonstrating once again why the ICU is the greatest union in Ghana. He called for unity to face the task ahead.

The Immediate past ICU-Ghana General Secretary, Mr. Solomon Kotei, said he was happy serving the great union for 8 years and was glad to see the zeal at which the new leadership are poised to lead the union to greater heights.

Mr. Kotei reminded the new national officers to take note of the ICU-Ghana motto which is “UNITY” and strive always to work towards managing diversity, adding “in running such an organization, you need to have diversity of opinion, how you manage it will give you the kind of success that you want. Because if people are united nothing stops them and nothing holds them down.” He urged the new ICU-Ghana leadership to work as a team.

Noguchi appeals for support to fix broken down equipment