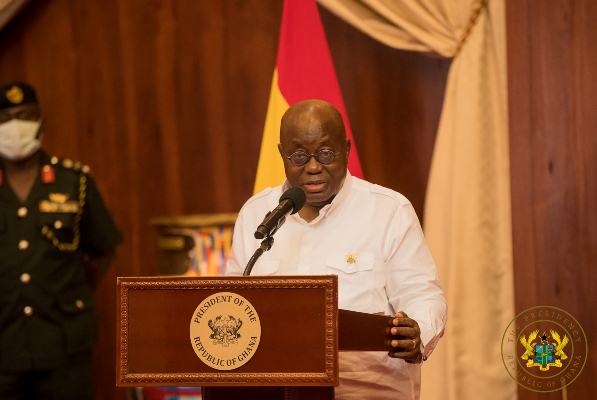 President Akufo-Addo has challenged private investors in the Yamfo to develop business ideas that can be supported under the 1D1F to create sustainable entities to accelerate development.

The President said this in response to an appeal by the Omanhene of Yamfo for more 1D1F projects to be sited in his area.

GBC’s John Sam-Arthur reports that President Akufo-Addo started his tour of the Ahafo Region with Courtesy calls on the Chiefs of Yamfo, Duayaw Nkwanta and Bechem. Everywhere the President had appeals made to him, for resolution of the people’s concerns.

At Yamfo, the Omanhene, Nana Ansah Adu Baah called for help in sectors like roads, education, security and modernization of the local market.

He also suggested that the Regional Offices of the Forestry Commission be set up in Yamfo because it is host to one of the biggest forest reserves in the old Bono-Ahafo area.

In his response, President Akufo-Addo promised to look into their requests. He also said non performing contractors will be replaced, while other challenges holding up road construction will be sorted out.

President Akufo-Addo responded to a request for more police personnel to be posted to the area as Newmont Gold Corporation gets ready to begin mining in the area.

At Duayaw Nkwanta, the President inspected work on an Administration block under construction at the Presbyterian Midwifery Training School.