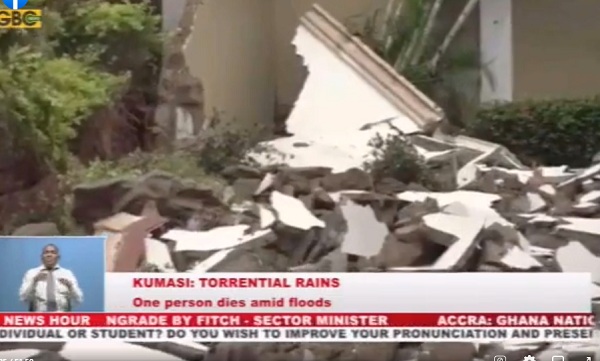 One person is reported dead and property worth thousands of Cedis destroyed following torrential rains on Wednesday in the Kumasi Metropolis.

The death occurred at Atafoa where the river bearing the same name overflowed its banks.

At the Daban new site, two houses were destroyed including ¢14,000. The owners of the damaged houses blamed the flooding on constructions on a waterway by a developer upstream.

GBC’s correspondent, who visited the scene, saw affected people counting their losses. The four-hour downpour started around 5 p.m. on Wednesday and lasted deep into the night. It took commuters hours to escape a heavy vehicular traffic.

What happened last night, to some residents, was not surprising because of deliberate attempt by developers to build in waterways, thereby obstructing free flow of water and drainage system.

A former KMA Chief Executive, Samuel Sarpong, was a victim of the flooding. A wall of his Daban new site was knocked down. Almost all houses around the area suffered from the rainstorm.

Mr Sarpong speaking with GBC NEWS blamed the situation on lack of political will to call developers who build on waterways to order.

The NADMO Regional administrator, Nana Attakorah in an interview said, NADMO is aware of the perennial flooding in the metropolis resulting in the destruction of life and property. He said NADMO is working with the MMDCES and other NADMO offices to help address the impact of the disaster on victims.

Buhari to make second health trip to London this year