One dead, two others injured in an accident at Gomoa Mpota near Winneba 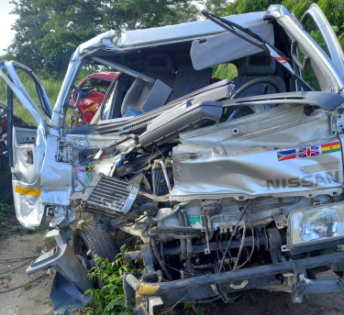 A mother of a two-year-old toddler died while two others including the baby sustained serious injuries in an accident at Gomoa Mpota, on the Winneba–Kasoa highway.

The accident is the second road accident within three days on the Cape Coast- Accra Highway which had resulted in 11 people losing their lives.

The first which happened on Sunday, August 22 at Gomoa Mampong, claimed 10 lives with 24 others sustaining serious injuries.

Chief Superintendent Samuel Asiedu Okanta, Effutu Municipal Divisional Police Commander told the Ghana News Agency, that at 16.30hrs on Tuesday, August 24, Seidu Osumanu, aged 61, who was driving a Nissan to pick-,up with registration number GR 3934-21, with a female passenger and her son, from Cape Coast run into the rear of a stationary Renault truck on the Mpota stretch of the road.

They sustained serious injuries and were rushed to the Trauma and Specialist Hospital for treatment.

The body has since been deposited at the morgue.