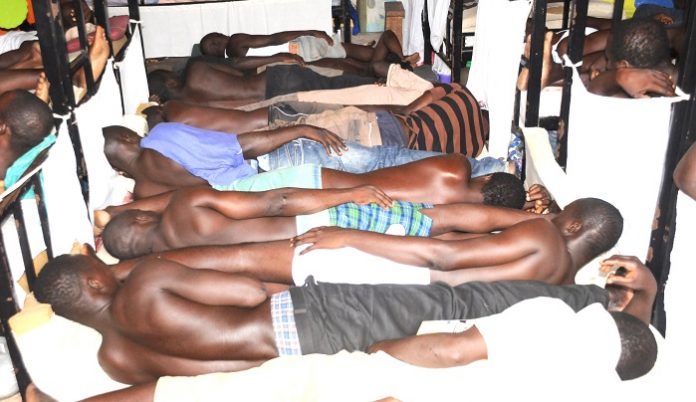 Mr Missah, whose speech was read by Deputy Superintendent of Prisons (DSP) Stephen Okine Aboagye of the Service Legal Unit,  on his behalf, said a total number of remand prisoners was 1,526 representing 11.56 per cent.

Mr Missah said this at the premiering of a documentary dubbed, “untold story of Ama Forson” at the Law Court Complex in Accra.

The documentary details the plight of a woman who was jailed 11 years for possession of narcotic drugs (Indian Hemp) but was acquitted and discharged by the Nsawam High Court after she had appealed against her Sentence. Before her appeal, the 67 year old food vendor had served 4 years and seven months of her jail term.

She is a beneficiary of POS Foundation’s, “In Prison Paralegal Programme,” which is based on self representation at the Courts. Inmates under the programme are taught how to appeal when they have suffered a miscarriage of Justice at the courts because they were unable afford the services of a good counsel to put up their defence during trials.

The Director General of the Ghana Prisons Service recounted that due to the percentage of Overcrowding, the service was faced with the difficulty in the classification of inmates and also prevention of ” criminal contamination” among inmates.

Mr Missah indicated that the Service like any other institution globally, aimed at contributing to building and maintaining a peaceful and safe society by keeping inmates in safe custody while upholding their dignity, developing their sense of social responsibility and promoting the  development of all inmates.

He indicated that In-Prison Paralegal Programme/Appeal was another intervention which would ensure access to justice and reduce congestion.

Mr Missah noted that under the programme, 25 inmates had so far been trained and 18 Appeal Schools had been created.

He commended POS Foundation, an NGO, for promoting access to justice in the country.

Dr Isidore Tufuor, a Lawyer and Consultant of POS Foundation, urged stakeholders in the Justice delivery system to take a look at the gabs in pre-trial, trial and post trial in Ghana’s adversarial system.

According Dr Tufuor, Ghana’s adversarial system offered opportunity to those who had the means, leaving the less previledged to their fate.

Dr Tufuor noted that the safety  of one person represented the safety of all.

Mr Owusu said as a foundation, they were not only involved in criticisms of the Justice delivery system but part of solutions of the system.

He thanked the Governments of the United States of America and Canada for lending a hand to the foundation to put smiles on the faces of the marginalized.