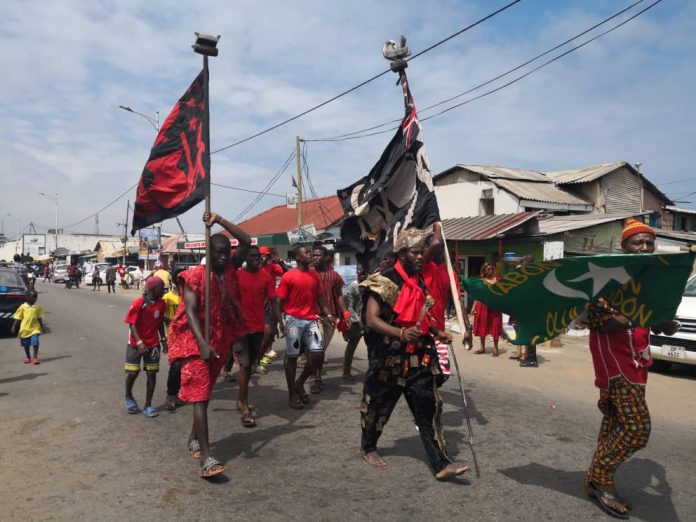 The Chiefs and People of Ga Mashie have begun celebrating the Annual Homowo, with the sprinkling of Kpokpoi, the traditional food for the festival in family houses and heritage sites.

The festival is celebrated to hoot at hunger in remembrance of the severe hunger the People of Ga experienced during their migration to present day location.

Speaking to GBC NEWS, the Asere Mantse, Nii Asere Boi appealed to the people to disregard the notion that Kpokpoi is food offered to gods. He explained that Kpokpoi is purified and signifies the Passover for the Ga State.

Festivals like Homowo are incomplete without the sound of drums, firing of musketry and singing from groups of people, not forgetting the sprinkling of Kpokpoi, the traditional food on which Homowo is based.

It is a beautiful sight to behold, as traditions and cultures are displayed. The Chiefs were seen dressed in their traditional royal garments mostly red and black colours, while the Ga people and people from the diaspora also dressed up to fit the occasion.

GBC’s Josephine Akari and Rachel Quartey reported that upon arrival at Ga Mashie, precisely at the Klornaa Weku Kpokpoi and its accompaniment, Palm-nut soup was being prepared by family members.

After which, the kpokpoi was served and eaten together in an earthenware bowl with family members.

The Development Queen, (Yaa Manye) for Gbawe Gonnsee, Naa Yaborley explained that the cooking and eating with family members signifies unity and eschews hatred among families.

At the residence of the Ga Mantse, preparations were being made for the celebration of Homowo in a grand style.

The Asere Mantse, Nii Asere Boi began the sprinkling of the traditional food, Kpokpoi on more than a hundred houses, before other clans followed suit.

He advised that people dispel the notion that Kpokpoi is food offered to gods.

’’The sprinkling of Kpokpoi is not for the gods, it is part of our celebrations to mark the houses as part of the Passover feast,” the Asere Mantse stated.

The team arrived at Afrimi Kpon, where the Chief for the area, Nii Dodoo Donkor reminded the people about the second wave of the COVID-19 pandemic. He urged them to be circumspect in their celebrations and observe the protocols diligently.

The team spoke to a cross section of the public who called on all especially people from the diaspora to join in the celebration of the festival.

There was heavy police and military presence to ensure the safety of the people and property during the Homowo festivities.