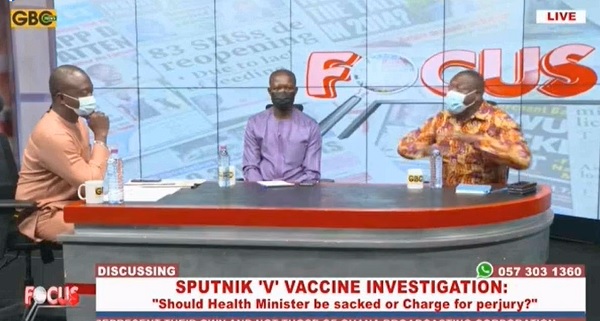 Private Legal Practitioner, Martin Kpebu, says perjury charges will soon be pressed against the Minister of Health, Kwaku Agyemang Manu, for the botched Sputnik ‘V’ Vaccine contract between the government and the Private Office of Sheikh Ahmed Dalmook Al Maktoum.

He explained that the Health Minister’s office may be guilty of perjury by stating that the vaccine has not been paid for when indeed payment had been effected.

Mr. Kpebu said, “when found liable, the Minister could face expulsion or suspension from Parliament.”

Contributing to the discussion, MP for Akatsi South and a member of the Ad hoc committee of Parliament, Bernard Ahiafor observed, “there is no justification for the action of the Health Minister, Kwaku Agyemang Manu, irrespective of the exigencies of the time.”

Mr. Ahiafor said the Ad hoc Committee which investigated the case, cannot be faulted for not proffering sanctions against Mr. Agyemang Manu, because it is a fact-finding committee.

For Mr. Ahiafor, the issue must be referred to the Special Prosecutor.