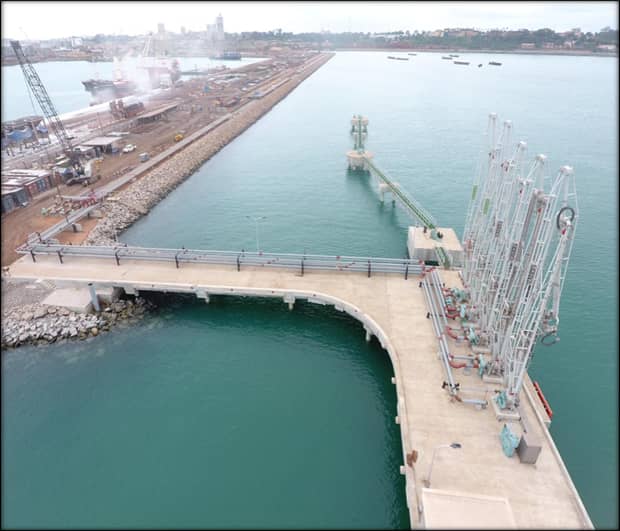 The new ultra-modern Liquid Bulk Terminal (LBT) at the Port of Takoradi, which is Ghana’s deepest in-harbour LBT, will receive its maiden liquid bulk cargo tanker vessel at the end of this month (June 2021). This follows the conclusion of engagement sessions with petroleum downstream stakeholders in Takoradi which the Director of the Port of Takoradi, Captain Ebenezer Afadzi described as, “a critical final step before the start of operations at the terminal”.

The Takoradi Liquid Bulk Terminal project which was initiated by Ibistek Ghana Limited, a wholly-owned Ghanaian entity, can discharge 80,000 tons of liquid cargo (oil) per stream day at the port and is designed to support vessels up to 60,000 tons of petroleum cargo carriers.  It also has a 14m-water depth berth, the deepest in-harbour berth in Ghana at the moment with loading arms for petrol, diesel, LPG-gas, bitumen, and other heavy fuels. It was built at the cost of 56 million dollars with funding from the Ghana Infrastructure Investment Fund, GIIF and the Consolidated Bank Ghana, CBG. The 303-metre-long new facility under a special purpose vehicle, SPV, Marshall Oil Services thus replaces the existing jetty which has a limited capacity of 20,000 tons per day. 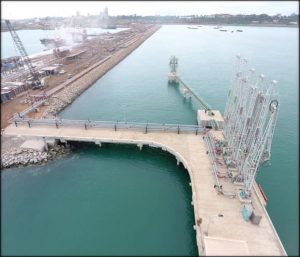 Even though the new LBT was commissioned in September last year by Dr Mahmudu Bawumia, the Vice President of Ghana, the critical final step of consultation with petroleum downstream stakeholders could not be held due to the second wave of the COVID-19 pandemic with its attendant restrictions on public gatherings. It is against this background that, the Director of the Port of Takoradi, Captain Afedzi and his officials held a briefing session with representatives of Bulk Oil Distribution companies (BDCs), Oil Marketing Companies (OMCs), shipping agents, the Ghana Infrastructure Investment Fund (financier of the LBT project), Marshall Oil & Gas Services (an IbisTek subsidiary and operators of the new LBT), the National Petroleum Authority (NPA) and the Ghana Ports and Harbours Authority (GPHA).  Thematic issues that came up for discussion during the two rounds of consultation sessions included: accurate metering/determination of cargo volumes, volume temperature compensation and billing, handling of pipeline displacement losses, pipeline size synchronization, standard operating procedures (SOPs), safety and security of vessels, product contamination liability and insurance, operating permits, applicable standards for calculation of quantities, pipeline condition (emptiness and fullness) determination prior to discharge, slop tanks inspection/draining before and after discharge.

It is worth noting that the petroleum downstream regulator, the National Petroleum Authority, NPA which had conducted three rounds of inspections on the terminal including its distribution pipelines and gave the greenlight, paving the way for the arrival of the maiden vessel. 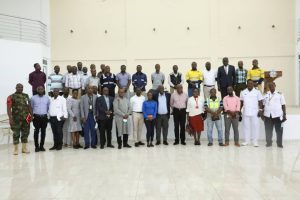 The new LBT project, when operational upon the arrival of the maiden tanker vessel, will become the deepest drafted LBT along the west coast of Africa; thus, positioning the Port of Takoradi as an essential and cost-efficient logistical support for the supply of liquid bulk cargoes such as petrol, diesel, LPG, bitumen and so on. Also, more than 50% of Ghana’s domestic petroleum consumption demands can be met with ease.