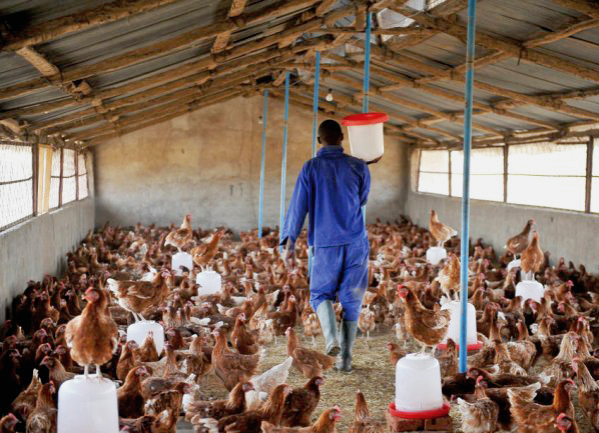 Employers in the poultry business say they are experiencing some challenges, and that the industry may be on the verge of collapse. They have attributed the situation to the lack of feed for the birds. The Managers of some poultry farms in the Ashanti Region have already started laying off workers, because the farmers have chosen to sell their birds, instead of holding on to them, without having adequate feed.

GBC’s Ashanti Regional Correspondent, Thomas Nsowah-Adjei, reports that maize and soya, which serve as the main food for the birds, have become so expensive that farmers are finding it extremely difficult to keep up with work on their farms.

Given the hike in prices of poultry feed and the outbreak of the bird flu, GBC News spoke with some poultry farmers to gauge their level of resilience, in the wake of the poultry industry predicament.

In the recent outbreak of the Bird Flu, more than 46,000 birds have been destroyed nationwide. For now, in the Ashanti Region, only one farm has fallen victim, while a test conducted on another farm has proved negative. Although the flu outbreak is being managed by the joint effort of the government, through the Veterinary Services Department, and the Poultry Farmers Association, more work is expected to completely bring the situation under control.

The hike in the prices of poultry feed seems to compound the problem, forcing some farmers to sell their birds and subsequently lay off workers. This situation some believe could fuel the already unemployment challenges in the country.

The National Chairman of the Poultry Farmers Association, Victor Oppong Agyei, expressed fear about the future of the industry which employs quite a chunk of the Ghanaian youth.

On the bird flu outbreak, Mr. Oppong Agyei said, “it is a problem, but we are happy, it is being effectively managed.”

A visit to Oserby Unique Farms at Kubease in the Ejisu Municipality showed that more than 40,000 birds have been sold, leading to the laying off of about 30 workers. Farm Owner, Mrs. Harriet Roberta Osei, added her voice to calls on the government to intervene to save the industry from collapsing.

On the bird flu outbreak, Mrs. Osei said, “it is not worrying because effective biosecurity measures and an absolutely clean environment will be safe for the farms.’’

She was, however, unhappy that insurance companies are not willing to insure the farms to secure investments, in the event of an outbreak of the deadly disease.