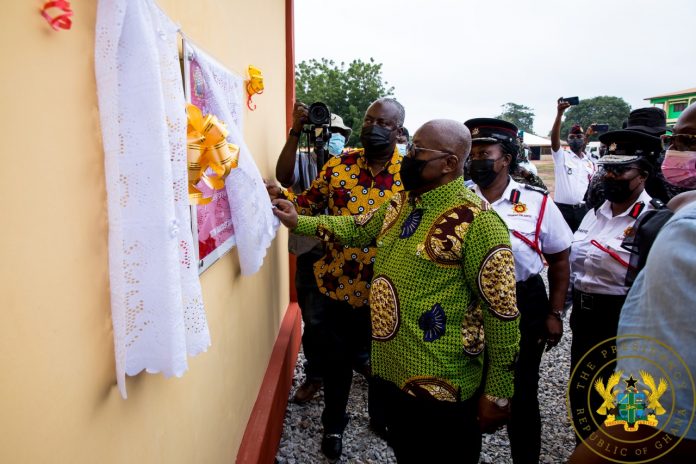 The second day of the President’s tour to the Bono region saw him inaugurate the over ¢2 million first phase of the Bono Regional Headquarters of the Ghana National Fire Service.

The second phase will have a basketball court, canteen, transit quarters for staff, a car park and a maintenance block.

He also stopped at the site of the construction of offices for the Sunyani West Municipal Assembly in Odumase.

President Akufo-Addo was also at the Sunyani Municipal Hospital where he inaugurated a Maternity ward and mental health clinic.

The President also visited the Third Garrison of the Ghana Army in Sunyani and inaugurated the new Administration block funded by the Middle Belt Development Authority.

He also inspected troops accommodation and an assembly hall under construction.

Briefing the Media, the CEO of the Middle Belt Development Authority, Joe Dankwah, said the ¢1,425,000 Assembly hall of the 3BN is expected to be completed in three months.

President Akufo-Addo paid a courtesy call on the Chiraa Traditional Council and inspected works on the Chiraa-Akwaasua road to wrap-up his two-day tour of the Bono region.