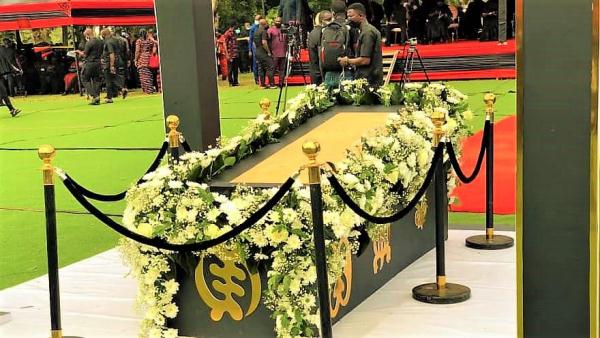 The President, Nana Addo Dankwa Akufo-Addo, has led a delegation of Government officials and activists of the ruling New Patriotic Party (NPP), to pay their last respect to the late Mr. Kwadwo Owusu Afriyie, popularly known as ‘Sir John’.

Representatives of the various political parties, including the National Democratic Congress (NDC), which is the largest opposition party, were also present to commiserate with the relatives and bereaved family of the deceased.

Popularly known as ‘Sir John’, Mr. Owusu Afriyie, a legal practitioner until his death, was the Chief Executive Officer (CEO) of the Forestry Commission (FC).

Born in 1952, the former General-Secretary of the NPP, died at the Korle-Bu Teaching Hospital, on July 1, 2020, after testing positive for COVID-19.

President Nana Akufo-Addo paying a glowing tribute to the late ‘Sir John’, whose mortal remains were laid in state at the Sakora Wonoo Junior High School (JHS) Park, described the deceased as a true friend.

He eulogised him for his resilience, commitment and tenacity of purpose, especially in the discharge of his duties, and prayed for his soul.

“My wife and I extend our deepest condolences to his entire family. Sakora Wonoo has lost a valiant son.

May the Good Lord bless him and give him a peaceful place in his abode and bosom,” the President stated.

Tributes were also said by the NPP, describing the late ‘Sir John’ as a brother, friend and patriot.

“The NPP, in particular, will miss you dearly,” Mr. John Boadu, General-Secretary of the governing Party, lamented.

A programme of activities for the final funeral rites, a copy made available to the Ghana News Agency (GNA), indicated that all the rites would be performed at Sakora Wonoo, hometown of the late ‘Sir John’.

Per the programme, there will be a family gathering on Friday, June 4, at the Sakora Wonoo JHS Park, following his burial on Thursday, June 3.

A thanksgiving service in honour of the deceased will be held on Saturday, June 5, at the Sakora Wonoo Seventh-Day Adventist Church.

Some of the mourners, in an interview with the GNA, said they would miss the late ‘Sir John’ for his eloquence, sense of humour and humility.