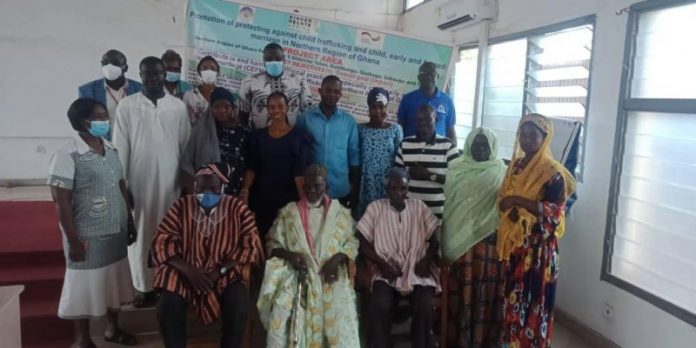 Mr Ken Addae, the Project Officer of Pan-African Organisation for Research and Protection of Violence on Women and Children (PAORP-VWC) has called on the government and other stakeholders to take actions to ensure that child rights are protected and respected.

Mr Addae said, “When children’s rights are protected, they stand a better chance of growing up in a society which allows them to thrive”.

He made the call at a capacity-building workshop for local stakeholders on existing laws and policies that protect children in the country.
The event, held at Tolon, in the Northern Region was part of a three-year project on promoting protection against child trafficking and early child and forced marriages in Northern Ghana.

The project which started last year is being implemented in five districts in the Northern Region, including, Tolon, Kumbungu, Gushegu, Zabzugu, and Tatale.

It seeks to contribute to ending harmful traditional practices, especially child early and forced marriages, as well as child trafficking in the Northern region.

Mr Addae noted that children needed special protection and support from parents and guardians, and said, they were considered vulnerable in society.
Madam Mary Agiiba, Tolon District Project Officer of PAORP-VWC, said children, irrespective of their age, race, gender, wealth, or birthplace have the right to be treated fairly, equally, and with dignity.

She advised policymakers to strive to implement and monitor child rights-based development activities at the local and national levels to promote the rights of children positively through their work.

He urged the partners to develop educational programmes to advance parental relationships with the children and educational institutions towards parental attitudes on child rights which were conditioned by the central cultural model in the family and the community.

Drafting a Will not an invitation to death